Home » Knowledge Bank » Water sensitive cities » Governance and policy: behind the scenes of a Wa… 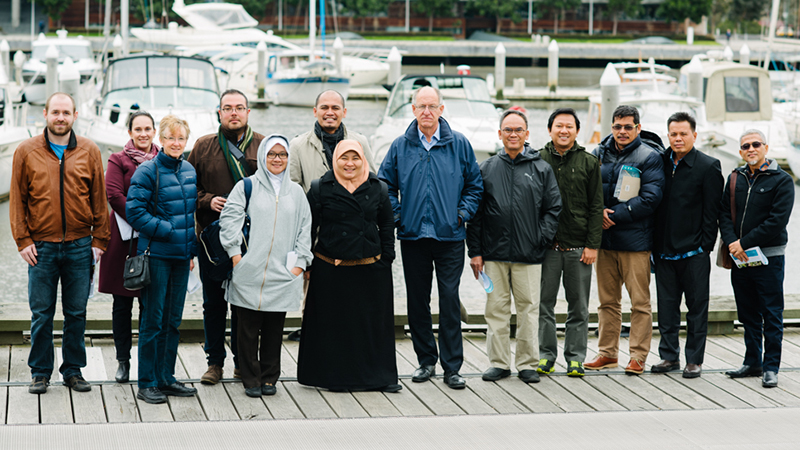 “People often see developing countries as frozen in time, like the community is not changing, but you have to see that the societies are dynamic,” explains Dr Reni Suwarso from Universitas Indonesia (UI).

Understanding and influencing the complex layers of this dynamism in Indonesia’s water management is the task facing a multi-disciplinary team of Urban Water researchers from UI, Institut Pertanian Bogor (IPB) and Monash University.

“We’ve been finding it challenging,” says Dr Megan Farrelly from Monash, “trying to work out all of the different players, decision makers and influencers that have a role in shaping water delivery, water treatment, sanitation, and environmental water health as well.”

Researchers are investigating the current governance arrangements around water management in Bogor, and identifying opportunities to advance these arrangements to better support a transition strategy towards Bogor becoming a Water Sensitive City.

To understand water governance in Indonesia at local, provincial and national levels, the researchers have been conducting interviews and focus group discussions with members of government agencies and organisations involved in water policy, supply and planning. The research has focused on four case studies at diverse sites in Bogor City and Bogor Regency.

The four cases were chosen because they illustrate the varying scales at which Water Sensitive City principles can be adopted, in governance terms and technical terms, and because they represent different types and stages of urban development. This range is vital for achieving the aim of making the research applicable to contexts across Indonesia.

The focus group discussions were an opportunity for researchers to explain their concept of a Water Sensitive City to the local leaders and officials who will ultimately be responsible for any transition, and to together unpack the current water governance situation and shape a shared vision for the governance of a water sensitive Bogor.

“The problems at the city and district levels cannot be separated from governance at the provincial and national levels,” asserts Professor Yusman Syaukat from IPB. This insight highlights some current issues, as the local government water authorities, or PDAMs, in Bogor have not capitalised on opportunities for collaboration. In this context, researchers have been pleased by the various PDAMs’ participation in the focus group discussions, which were attended by senior directors from Bogor City and Bogor District PDAMs. “And, [those two] are actually among the best PDAMs in Indonesia,” adds Professor Yusman.

Today’s challenge was made greater in 2014 when a lot of city- and regency-level water management responsibility was shifted to the provincial government PDAMs. The city and district still more or less manage Bogor’s urban water, but now have less strategic planning autonomy.

Many factors, local and universal, make Bogor and other Indonesian cities’ transition to a Water Sensitive City a long-term project.

To continue the governance work that researchers have begun, the team has set up the Urban Water Learning Alliance. “As has been seen in similar projects in Australia, our hope is that the process of bringing people together fosters a dialogue that we hope the Learning Alliance will build on and build out,” says Dr Farrelly. All the stakeholders who have dedicated time to the discussion are now ‘water champions’, and the Cluster intends on identifying individuals among them to lead various aspects of the work.

The task of developing new regulations for water governance “is not sexy” admits Dr Suwarso. “We want to build a water sensitive city – an imagined city… an ideal.” She acknowledges that this research is a slow, complicated process. Now at least, the first steps towards that ideal city have been taken.

Given the long projected timeframe for the broader project, one ongoing challenge will be balancing attempts to keep up with the fast pace of informal urban development against the need to put time and effort into strategic masterplanning. “How rigidly,” Dr Farrelly wonders, “do you stick to that strategic planning process, which is critical for making sure that all the systems are connected in the right way to truly deliver a Water Sensitive City? Are there pockets and components that we could just be moving forward with?”

Learning Alliance members also gain hope for the future from the research process itself. This process has brought together practitioners and researchers from a range of disciplines.

“The strength of this research is that we worked together as a multidisciplinary team, with people perceiving water issues from different perspectives. We did not invent this practise, but very few projects have been built on this approach,” explains Dr Suwarso with pride.

The team is currently finalising their recommendations and their succession planning for control of the Learning Alliance. “But we certainly don’t intend on walking away,” says Dr Farrelly. “Communication will remain open for challenges and issues that arise.”