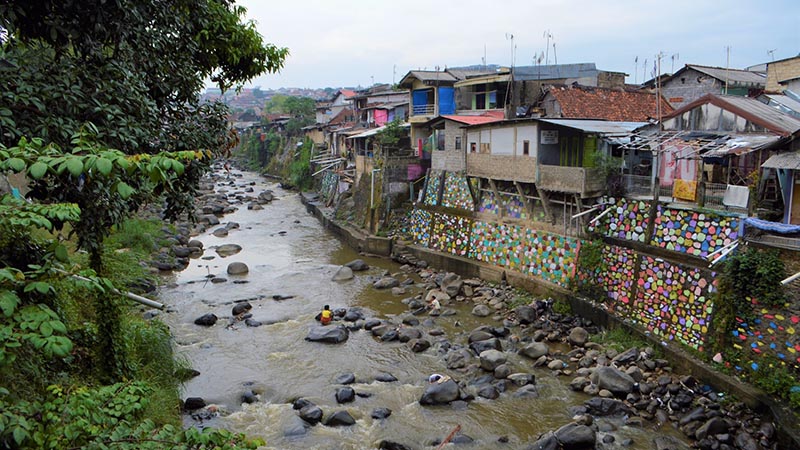 After months of synthesising community ideas, researchers have presented a suite of water-sensitive solutions to the Pulo Geulis community in Bogor.

In this second workshop, the team explored the community’s thoughts on a range of urban designs for their settlement – designs that captured the residents’ visions for their settlement recorded last November, and that delivered alternative clean-water sources and reduced waste-water contamination of the Ciliwung River.

The designs included different water sensitive green infrastructure options, such as wetlands for grey water treatment and ecodrains and greenwalls for rainwater harvesting and biofiltration.

“It is really important for researchers to speak directly to the residents to discover how they view their settlement, and what design scenarios work best to achieve their visions,” says Dr Raul Marino, an Urban Architecture researcher at Monash Arts Design and Architecture.

Led by Dr Marino from Monash, Dr Kaswanto from IPB, and Irene Sondang from UI, the residents were walked through a number of different urban design scenarios, and their perceptions and views on each discussed. The feedback allowed the research team to identify which mix of designs held most merit for the residents.

These design options were the result of visioning workshops that researchers ran with various communities in Bogor Raya in November 2017. The workshops were developed to introduce the concept of water-sensitive practices and urban design, to explore the aspirations of the residents of Pulo Geulis for their community, and to discuss how water may play a role in that vision. The participants recognised that to achieve social and economic security, solutions were needed to tackle waste water and solid waste management, and to create open public space.

During the workshops, the Lurah (district head) of Bapakan Pasar, in which sits Pulo Geulis, explained to Prof Hadi Susilo Arifin of IPB that the community needed a clean river, and that this needed to be an integrated effort between communities upstream and downstream. “We would also like to provide a turap (retaining wall) that is environmentally friendly along the river, for tourism,” he added. (View full interview below.)

Nova, a young resident of Pulo Geulis commented: “By joining the workshop I am more aware that we should not put rubbish and grey water into the river.”

Pulo Geulis is the oldest of the Cluster’s four case study sites, and the one with the least prior urban planning and involving the most grassroots community engagement by researchers. This 300-year-old informal settlement is seen by its residents as a beautiful island with tremendous potential to become an exemplar community, both socially and economically, that could set the benchmark for slum revitalization in Bogor City. Its community leaders envision Pulo Geulis becoming a cultural tourism destination, named Taman Palangi (Rainbow Garden), with the aim of strengthening the local economy and improving social wellbeing.

Currently, households in Pulo Geulis discharge domestic waste water and solid waste into the Ciliwung River, creating health issues for residents and exacerbating downstream flooding during heavy rainfall. An added challenge is that the high density of the settlement makes it difficult to find space for solutions.

The outcomes of the Urban Water Cluster’s workshops are urban designs and green technology recommendations, which communities can leverage when developing proposals for slum upgrade grants and funding from local government and other national or international organisations, such as the Kampung Improvement Programme (KIP).

KIP launched in 1969 and aims to realize Indonesian cities without slums and to improve the livability and sustainability of neighborhoods. These mandates are aligned with Sustainable Development Goals number 3 (Good health and well-being) and number 11 (Sustainable cities and communities).

The aims of KIP also align closely with those of the Urban Water Cluster, which is working to achieve healthy, resilient and sustainable Indonesian cities through the lens of Sustainable Development Goal 6 (Clean water and sanitation).

The Cluster research objectives are to deliver water sensitive policies, technologies and urban designs that are applicable at local and metro scales and support the leapfrogging of Indonesian cities to Water Sensitive Cities.