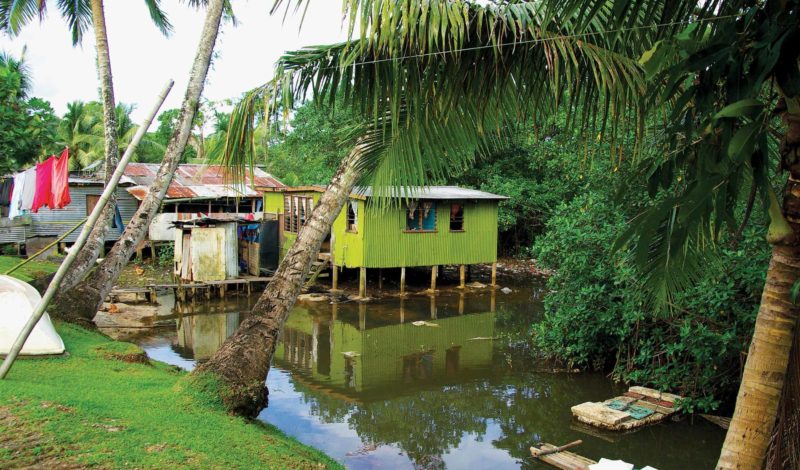 “Water, water everywhere, nor any drop to drink.”

The lament of the Ancient Mariner has clear parallels with the plight of the world’s urban poor, for whom a lack of sanitation and clean water is a matter of life and death. Polluted water, along with inadequate water supply, sanitation and hygiene, causes 80 per cent of diseases and one in every four deaths in developing countries.

But a groundbreaking, five-year project, soon to get underway in 24 urban informal settlements in Fiji and Indonesia, that aims to demonstrate the relationship between improved environmental health and better human health, may provide a blueprint for radical change.

For Professor Rebekah Brown, project leader and director of Monash University’s Sustainable Development Institute, addressing the challenge of providing clean water, sanitation and flood protection for impoverished urban communities is nothing less than “the phenomenon of our age, and one of the grand challenges for our planet.”

“We’ve got one billion people currently living in informal settlements, and that number is expected to grow to well over three billion by 2050,” she says. “The urban poor are a rapidly growing part of the world’s population, and we need to find a way that these people and places don’t get left behind.”

An internationally recognised authority on water management, Professor Brown began her career as a civil engineer, but became disillusioned with various projects’ lack of concern for environmental and social outcomes.

“I always thought there were better ways to design infrastructure to better serve communities and reduce the impact on the environment. I was always a bit bewildered at the times when I could come up with more environmentally and socially sensitive designs – that would practically cost the same – but the client or the organisation wasn’t supportive. That’s really what made me go back and do a PhD in social sciences, to really understand how one goes about influencing change.”

A radical rethinking of failed approaches, the slum revitalisation project aims to turn slums – the so-called “informal settlements” – into independent sites that can recycle their own wastewater and harvest rainwater. The project also hopes to create green space for water cleansing and food cultivation, and restore natural waterways to encourage diversity and alleviate flooding.

In the process, the project will deliver the first public health and environmental data on the outcomes of an alternative water management approach. A unique experiment, it’s both a physical intervention and a randomised control trial – hence the use of 24 communities to provide statistical rigour. The hope is that after five years it will provide the basis for new water infrastructure policies and investment strategies for urban informal settlements worldwide.

It’s funded by an alliance between global charitable foundation the Wellcome Trust, which awarded the project a A$14 million grant, and the Asian Development Bank, whose A$13 million donation will cover infrastructure and construction costs.

The funding from the two radically different bodies, says co-director of assessment Professor Karin Leder, head of the Infectious Diseases Epidemiology Unit at Monash’s School of Public Health and Preventive Medicine, is emblematic of the rigorously multidisciplinary, multi-sectoral nature of the project.

“A real highlight of this project is to bring together two partners that have separate interests. The Asian Development Bank would not have funded the research and the Wellcome Trust would not have funded the infrastructure, so as a way forward for funding agencies to be prepared to sit down and consider these kinds of mutually beneficial partnerships, it provides a novel blueprint,” Professor Leder says. “In the same way, I’m not aware of any other project that, in addition to the international collaborations, involves five Monash faculties and this degree of interdisciplinarity. The challenge at the beginning was to talk the same language, but it’s an incredible opportunity to learn from people from other backgrounds.”

Monash has been a leader in the development of water-sensitive urban design since the early 1990s, when researchers started to look at ways to mimic natural processes in urban landscapes to improve water quality, says Professor Wong.

“We’ve been able to turn something that was highly conceptual into something that is physical. It was an ongoing evolution in how we were able to introduce green technology to improve the quality of water and reduce pollution,” he says.

“The concept of a water-sensitive city has evolved over that time … Now we see it as the outcome of integrated delivery of water-sensitive urban design, social planning and good community design for beneficial outcomes in terms of water supply security, flood management and environmental protection. Then we got to the point to say, ‘If all of this green infrastructure is as good as we believe it is, then why don’t we start to think about developing an adaptation targeting fundamental physiological health?’”

The challenge for the team is to replicate the proven outcomes in developed urban areas in under-resourced areas. Conventional hydraulic engineering solutions, for instance, are self-evidently no answer for the slum-dwellers in informal settlements. The approach has major financial, environmental and social costs, and is unlikely to be implemented in developing countries with inadequate resources for basic infrastructure for growing populations, much less meet the needs of the world’s most vulnerable living in urban informal settlements.

The answer, the team hopes, is the concept of green infrastructure, first developed about 40 years ago and progressed to a point where scientists have a close understanding of the combination of soils and plants that will bioaccumulate contamination. The pioneering work at the Lynbrook Estate, in Melbourne’s outer south-east, in the early 1990s came
to represent the many environmental, social and economic benefits that can be realised through water-sensitive urban design.

“We can keep giving people medicines such as antibiotics, but if we don’t clean up the environment they live in it’s just an ongoing systemic problem.”

Drawing on demonstrated past programs of Monash-led work such as Lynbrook, as well as others in China, Singapore and Israel, the slum revitalisation project will alter the biophysical
landscape to reduce communities’ exposure to faecal and other hazardous contamination in the environment, while also improving biodiversity.

It’s embedded in a concept known as biomimicry, in which green infrastructure and technology are designed to mimic what would happen in nature. “In nature when it rains, water falls into a forested area, for example,” Professor Brown says. “It runs over the land, then it goes into a receiving waterway. When it runs over the land it undergoes a natural cleaning process; there’s an exchange of nutrients and other biological and chemical properties between the land and the water. So what we’re doing is artificially constructing green infrastructure to provide that natural cleaning process.”

The water services provided to the 24 communities – 12 each in Fiji and Indonesia – will focus on the areas of drainage and flood protection, to combat standing water that is the breeding ground for infectious diseases such as dengue and Zika.

Rainwater will be collected and treated on-site to make it drinkable, while newly constructed toilets will direct wastewater and sewage into local wastewater biofiltration systems – connected ponds that will act as treatment plants, producing water that can be used for growing food and flushing toilets.

A team of health professionals will measure the impact of the project on the communities over a five-year period, with a focus on children under five years of age.

“They’re all decentralised systems that naturally clean up the water,” Professor Brown says. “We’re trying to show that the actual environment is key. We can
keep giving people medicines such as antibiotics, but if we don’t clean up the environment they live in it’s just an ongoing systemic problem.”

Translating the research from the laboratory to the field, however, is a quantum leap. “When you take this work out into the real world and real communities, you can’t control what will happen,” Professor Brown says. “There are so many environmental, social and political factors. All our preliminary work has suggested that the communities shortlisted really want to work with us, but there could be a change in sentiment. There could be a massive cyclone that wipes all our work out. It could be that the technologies that we implement improve health and the environment, but maybe
not enough.

“We certainly have thought long and hard about such risks and have put what safeguards we can in place, but at the end of the day global challenges need dedicated interdisciplinary and multi-sectoral research, because without the research we will never develop the much-needed suite of answers.”

This article was first published on Monash Lens. Read the original article.