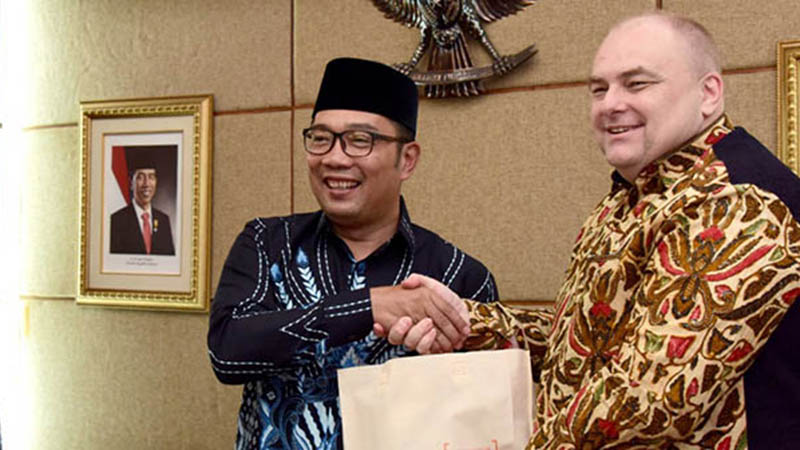 Last December’s Urban Water showcase and exhibition in Bogor was just one of several meetings through which researchers hope to maximise the reach and uptake of their 18 months’ work together. Another key encounter came two days after the Bogor event – a meeting with the famously innovative and happiness-focused governor of West Java, His Excellency Bapak Ridwan Kamil.

In the Governor’s Bandung office on 6 December 2018, the AIC Urban Water team, from Monash University, Universitas Indonesia and Institut Pertanian Bogor, presented Greater Bogor’s vision for a water sensitive future and sought the governor’s support for exploring opportunities to scale up the Water Sensitive City approach from Bogor Regency to the whole Ciliwung River catchment.

As he discussed with the AIC in an interview last year while in Melbourne to meet with Lord Mayor Sally Capp about ‘Smart Cities’, the Governor places living standards and happiness at the centre of his strategic planning. After hearing about the Urban Water Cluster’s work in Bogor in a presentation from Professor Diego Ramirez-Lovering from Monash, he shared with them his vision for the whole of West Java, covering resilience in the face of disasters, liveability of cities, digital inclusivity, health of rivers, and tourism. At every turn Bapak Ridwan expressed a desire for collaboration with Australia’s researchers and government.

The Governor’s ideas for improving living standards for all include his ‘pinky’ minibuses providing mental health services around Bandung, his plan to spread digital literacy to all West Java citizens, his belief that every city should have a public square and a vibrant main street, and his vision for a comprehensive, integrated clean-up effort on one of the world’s dirtiest rivers, the Citarum River. Developing urban design standards, river rejuvenation projects and urban flood mitigation are elements of his vision that the Urban Water researchers, with their mutual learnings from Greater Bogor, could help inform and shape.

“As an architect,” declares the Governor, “I hope to develop a better urban design system to improve things, for rivers to become a celebrated public space and for community mindsets to be changed” – that he and the Urban Water team are well aligned could not be more evident.

Both parties know that water governance and system design must be integrated across all levels of government and that it’s success relies on a well-informed public. Education, as the first step towards reigning in issues around poor sanitation and other waste discharge into the river, is viewed by Bapak Ridwan and also the Cluster as critical for achieving behaviour and system change. The Urban Water Cluster is just winding up a comprehensive community engagement effort along the Ciliwung River in Greater Bogor, and the Governor said he was very interested in benefiting from their approach and findings.

During this challenging era for Indonesia, with Bapak Ridwan focused on raising West Java’s resilience in the face of flooding and other natural disasters, and tasked by President Jokowi with cleaning up the Citarum River, AIC Urban Water research will find some practical applications to support the transition of West Java towards a water sensitive future.