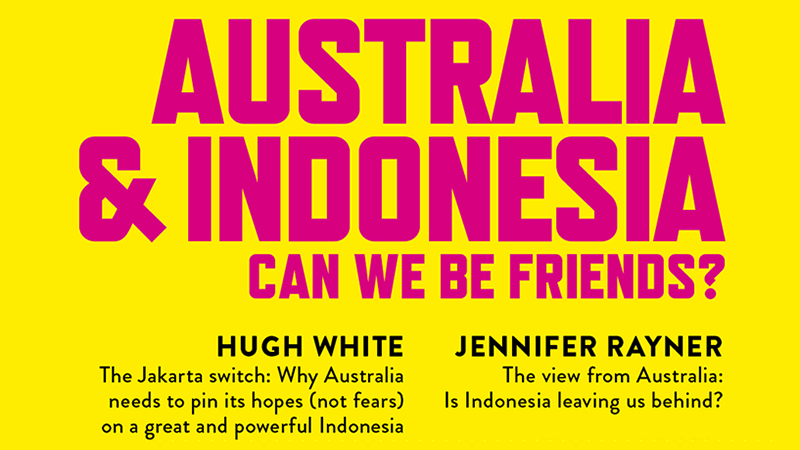 Much to the frustration of diplomats in Jakarta and Canberra, positive trends have yet to change the way the Indonesian pub­lic looks at Australia. The old view of Australia as a white man’s colony in Asia still remains dominant, and Indonesian political leaders often play this up, exploiting the public’s ignorance whenever the two coun­tries become entangled in another dispute.

The Indonesian elite, along with members of the media, who should know better, have been complicit, keeping silent when they could, and should, have spoken up. They bow to patriotism and cheer the government, whether they believe it is right or wrong. This is par­ticularly true whenever their government is in dispute with Australia. Surely some in the Indonesian media could have explained the con­cerns Australians had about the way Indonesia slaughtered cows? Surely some would have watched the Australian documentary about the two Bali Nine members, showing how they had reformed, and could have presented this as a reason to spare their lives? Yet the media have their own motive: selling news, which means reporting the bad and ignoring the good. It is probably due to this that, for all these years, the Australia–Indonesia Institute continues to sponsor bilateral editor meetings to try to inject some much-needed balance into the coverage of each country’s affairs.

The disputes Indonesia has had with Australia reflect the inten­sity of the relations between these two giant neighbours. Given their geographical proximity, they are bound to have their ups and downs. If the absence of tensions is used as an indicator of how close two coun­tries are, Indonesia has stronger relations with Iceland. For better or worse, Indonesia and Australia are condemned to be neighbours. They should make the most of their position and work on their relationship. Indonesia has also had its share of disputes with Malaysia, Singapore and now China. A better level of understanding and more knowledge about each other would certainly help both Australia and Indonesia.

For its part, Indonesians could learn to better appreciate the con­tribution Australia has made to their wellbeing and even prosperity, dating back to the early days of their country’s independence in 1945, and continuing with the economic assistance Australia has provided for development and, since 1998, for building Indonesia into a more dem­ocratic nation. Unfortunately, most development aid programs, unlike trade and investment, have low visibility. Until Indonesia trades more with Australia, and until Indonesia sees more Australian investment, the Indonesian view of Australia as barely relevant will likely remain.

Indonesia has yet to reciprocate Australia’s mantra, uttered by Paul Keating in the late 1990s and repeated by successive prime minis­ters, that “no country is more important to Australia than Indonesia”. Irrespective of whether this is true or not, a similar statement by an Indonesian leader about Australia could have made a vast difference to the Indonesian public perception.

Admittedly, Indonesia would never give Australia’s impor­tance such centrality. Indonesian diplomats prefer to see ASEAN as the cornerstone of its foreign policy. Next in priority are the other nine members of that association, followed by Japan, China and South Korea, and then the United States and Saudi Arabia. Australia would rank alongside European countries in terms of importance to Indonesia. But it should be noted that this is a very Jakarta-centric view. For Indonesians living in the east, perhaps from Bali and beyond, Australia is probably the most important foreign relation­ship. So Jakarta should at least consider Australia as one of its most important relationships. Until such a view is articulated, most Indonesians will remain indifferent towards Australia, which helps to explain why the old perception of Australia has hardly changed across the years.

But Australia will not be an important strategic partner, com­pared with other countries in the region, as long as trade and economic ties between the nations remain so limited. According to Indonesia’s Ministry of Trade, total trade between the two countries has actually shrunk by more than 4 per cent in the past five years. This is something both governments have been working to change, with the imminent completion of negotiations over a comprehensive economic partnership agreement.

Some Indonesian diplomats would say that Australia has always been strategically important to Indonesia’s foreign policy, and indeed the two countries have joined hands in setting up organisations such as the Asia-Pacific Economic Cooperation (APEC) and the East Asia Summit. They have also collaborated in countering terrorism, in trying to contain the flow of asylum seekers from the Middle East and South Asia, and in disaster relief operations. The rise of China, and its implica­tions for Indonesian national security, has led Indonesia, too, to review its defence cooperation with other countries, including Australia. Like other countries in Asia, Indonesia is hedging its strategic security, but it has rejected Australia’s entreaty to join in an alliance with the United States, Japan and India to contain China.

But as long as the economic ties are weak, Australia cannot be all that close to Indonesia as a strategic partner. Canberra and Jakarta have been dragging their feet in concluding negotiations for the com­prehensive economic partnership agreement. If and when they sign it – as they are expected to, later in 2018 – perhaps the two countries will invest in and trade with each other. Only then might relations move to the next level.

Endy M. Bayuni is former Chief Editor of The Jakarta Post. This article is an excerpt of his essay ‘The view from Indonesia: Dispatch from an indifferent neighbour’ which appears in Australian Foreign Affairs 3 ‘Australia And Indonesia – Can We Be Friends?’, published by Black Inc.