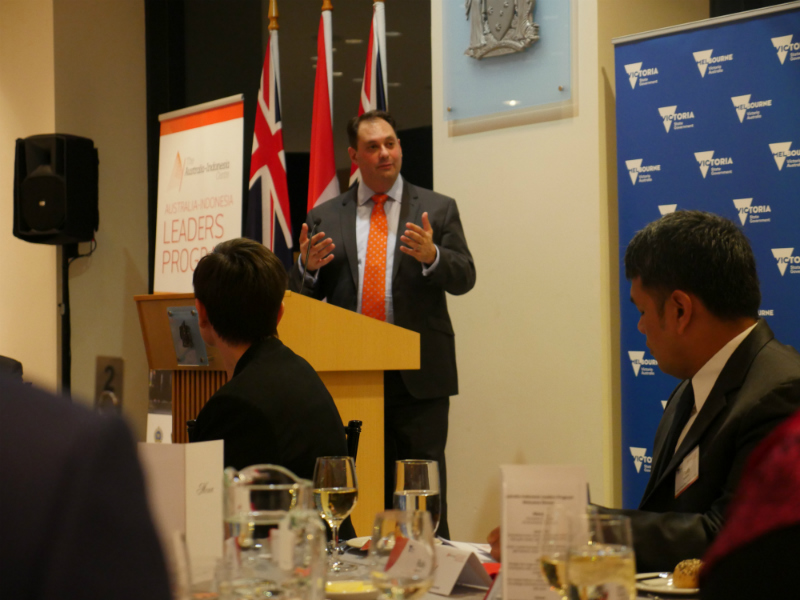 At a dinner reception held as part of the Australia-Indonesia Leaders Program, Victorian Minister for Small Business, Innovation and Trade Philip Dalidakis encouraged an “all-embracing” relationship between Australia and Indonesia.

“The importance of the relationship is in that we don’t just talk about one specific part of it. That’s the real strength of where we’re going. We don’t talk about just trade, just bilateral, just cultural – we talk about all of it. We want an all-embracing relationship between the people of Victoria and the people of Indonesia,” he said.

“First and foremost, it is about building that friendship and that trust. That trust is so important in terms of understanding. So that if there are any problems or difficulties along the way, that trust allows us to work through those experiences.”

The Minister stated that the trade relationship between Victoria and Indonesia sits at A$2.34 billion “and it could be a lot more than that”. International trade relationships are often sought further afield, and the Minister says this sometimes comes at the expense of our neighbours. He used the example of the success of famous Melbourne coffee roasters St. Ali’s entry into Indonesia as demonstration of interest right on Australia’s doorstep.

He also spoke on the importance of flexible and responsive entrepreneurship in a new economy. “The idea is if you fail, you fail fast,” he said. “And if you fail, you get right back up, dust yourself off and have another go. For far too long, when people have failed, others have closed the door on them. They fail to understand that what we’re doing is investing in people, not just necessarily a product or a service.”

The dinner also featured a panel discussion with pioneers in the creative industries.

Tony Reed, CEO of Game Developers’ Association of Australia, reiterated the Minister’s point on the willingness to fail in order to succeed with regards to the incubation of innovative ideas. Helen Simondson, Head of Public Programs and Education at the Australian Centre of the Moving Image, provided insights into the new ACMI X co-working and collaboration space, where the creative leaders of today will develop the visual technology of the future. And Odo Manuhutu, Director of Senior Diplomatic Course, Ministry of Foreign Affairs, Republic of Indonesia, provided an inspirational message urging government to embrace dynamic change in the global digital environment.