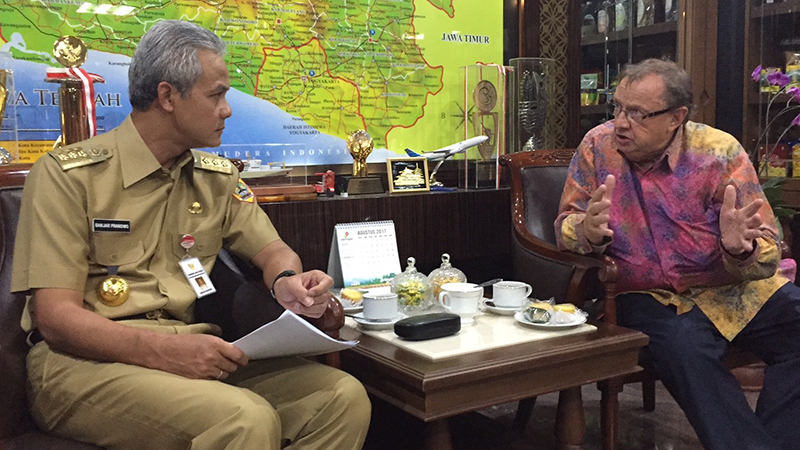 Many Australians think of Bali as a beautiful place to drink cheap cocktails by the beach. But Harold Mitchell AC, Chair of The Australia-Indonesia Centre’s Board, sees work opportunities.

“Europe is a great place for a holiday, but Asia is where the work is,” Harold said in a column for The Age today. And Australians are missing opportunities to trade with Asia.

Harold recently met with Mari Pangestu, who was the Minister of Trade and then Minister of Tourism and Creative Economy until 2014, and with Ganjar Pranowo, Governor of Central Java.

Central Java is “a region with a population of 34 million, 40 per cent bigger than Australia, and a go-ahead attitude that would leave most provincial Western leaders bobbing in its wake,” Harold said.

And that’s reflective of Indonesia as a whole: if the current trend continues, the country will have the fourth biggest economy by 2050. They’re currently at number 16 with a growth rate of five per cent. And their stock exchange index has risen by close to 40 per cent in 22 months.

“We are still failing to make significant use of a giant and rapidly expanding market,” Harold said.

“And on the way to Semarang airport I made a detour to Jepara, a town employing more than 80,000 in the production of the world-class teak furniture you see often in the shops of Bali and on the decks of super yachts around the world,” Harold said.

“The qualities and history of teak are almost mirrored by the Indonesians themselves. After years of exploitation, sustainable growth is being achieved and the result is a very beautiful, durable and strong product … and people.”