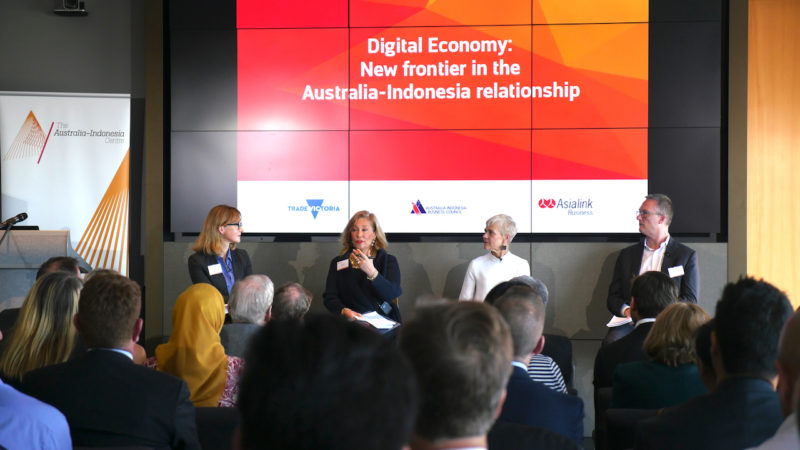 While traditional commodities such as wheat, crude oil, and animal products will continue to underpin bilateral trade relations, scalable growth can be unlocked by digital economy.

A Google-Temasek report found that Southeast Asia is on track to realising a USD 200 billion digital economy by 2025. Indonesia, with a population of 260 million, is driving this growth.

Indonesians spend more time on mobile internet than almost anyone else in the world. They spend an average of 3.9 hours per day plugging in their smartphones, twice as long as U.S. (2 hours/day) and U.K. (1.9 hours/day).

It is no surprise that Jakarta is deemed as the Twitter capital of the world. Its residents spend an average of 22 days a year in traffic jam.

For 4 hours a day, Indonesians chat on WhatsApp, book rides and food on Go-Jek and Grab, browse Facebook and Twitter, watch video blogs on YouTube and Instagram, and shop on Tokopedia, Bukalapak, and Lazada.

If Australian products and services can capture Indonesians’ attention even just for 5 minutes out of those 4 hours, it could potentially unlock significant trade growth.

How, then, can Australian businesses be part of Indonesia’s digital economy story?

The foundation lies in the relationships between key players in the digital ecosystem. “I think you come back to the founders and the investors,” she said.

“We need more founders, and we need them to be as capable as they can be.”

A survey of 32 CEOs or founders of leading Southeast Asian startups shows that the region’s startups are increasingly transforming from two-person projects into substantial businesses, having received more than USD 3.4 billion in venture capital and growth equity in 2016.

This presents inherent challenges, such as identifying the right executives, choosing between experienced foreign nationals and locals with less experience but understand the local context, and in delivering high revenue performance with maintaining high morale.

The success of these startups, the survey concludes, depend on how well CEOs and founders manage this transition while growing themselves in the process. However, there is no deep executive experience in the region yet in navigating these challenges.

Ms Anderson believes Australian investors can play a role. “We need to provide mentors where and when required.

“On the investors side, we need to provide access to capital, whether from private family offices, traditional VCs, industry, or pension fund overseas.”

The art of the long view

“In making the most of these opportunities, I think there’s two things that we need to address,” said Ms Anderson.

“The first is what I call the art of the long view: understanding the outcomes and trends, and what that means for us as a country, state, economy, and as a society.”

Joint research by Austrade-Amplitude shows that Indonesia’s e-commerce growth is fuelled by an increase in smartphone penetration, an emerging middle class with larger disposable income, improvement in payment infrastructure, and increasing foreign direct investment into the sector.

All of these factors will likely improve over the next decade, so the trend is promising.

“But there are also some tactical things we can do right now.”

Ms Anderson highlights opportunities for Australian businesses to engage in major international events hosted by Indonesia this year, such as the World Conference on Creative Economy, the Asian Games, and the IMF-World Bank Annual Meeting.

The most valuable tactical initiatives involve bringing the right people together.

After presenting an opportunity to bring together entrepreneurs on the sidelines of a conference in Bandung, Ms Anderson said, “you can’t imagine how many people are opting in.”

This rapid development of Indonesia’s digital economy presents numerous opportunities to engage consumers who were previously out of reach. It is up to Australian businesses to ensure these opportunities will benefit the Australian economy.

Technology-driven innovation will not only unlock growth in traditional sectors by achieving unprecedented efficiencies; it will also open up opportunities in new sectors.

Together they represent scalable growth in the Australia-Indonesia trade relationship.

Ms Laura Anderson was part of a panel discussion hosted by The Australia-Indonesia Centre, in partnership with Trade Victoria, Australia Indonesia Business Council, and Asialink Business.

Ms Anderson was joined by Dr Stephanie Fahey (CEO, Austrade) and Andrew Parker (Partner, PwC) on the panel. For more articles on the event, read:

You can find more information on Indonesia’s digital economy on Austrade’s E-commerce in Indonesia: A guide for Australian business.