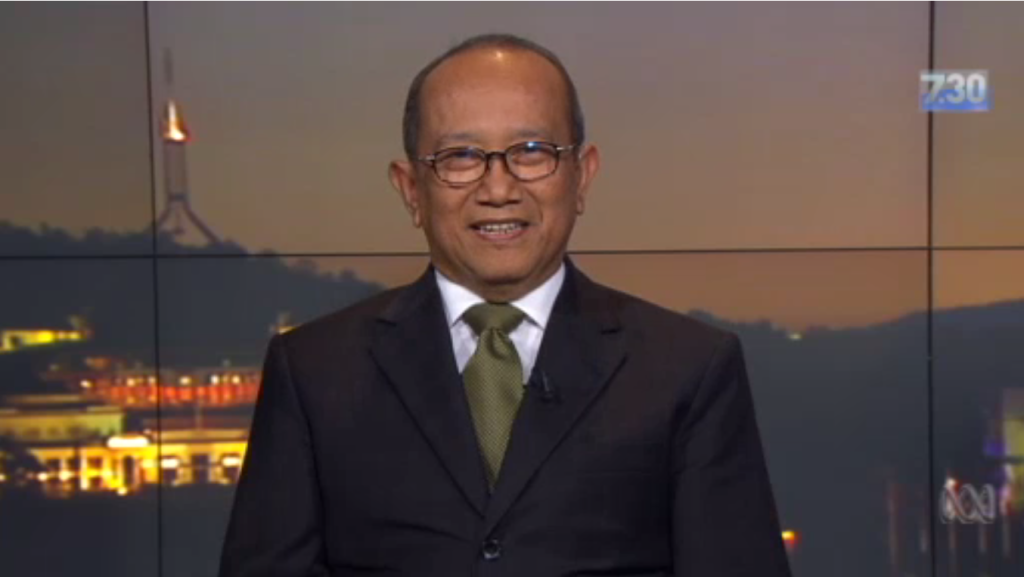 Indonesia’s ambassador to Australia Nadjib Riphat Kesoema tells 7.30 that the relationship between the two countries is ‘very good’ ahead of historic talks between Malcolm Turnbull and Joko Widodo. He expects it will be even better once the two leaders meet.

LEIGH SALES, PRESENTER: Beginning later this week, Prime Minister Turnbull will face his first major test in the international arena. He’s heading to the G20 Leaders’ Summit, the APEC leaders’ summit and the East Asia Summit, all opportunities to meet for the first time many of the leaders of countries vital to his economic innovation agenda and regional security. En route, Malcolm Turnbull’s stopping in Indonesia, making it one of his first international bilateral meetings as Prime Minister – a mark of the importance of the relationship and perhaps a sign that it’s in need of some repair. Controversies over spying, live cattle exports, “Stop the boats” and the execution of two Australian drug smugglers have led the diplomatic relationship to its lowest ebb since East Timor in 1999. Nadjib Kesoema is Indonesia’s ambassador to Australia. He joined me from Canberra to discuss this week’s bilateral meeting in Jakarta.

Ambassador Nadjib, thank you very much for coming in.

NADJIB RIPHAT KESOEMA, INDONESIAN AMBASSADOR: Thank you so much, Leigh. It’s my pleasure.

LEIGH SALES: We know that the relationship between Indonesia and Australia has been somewhat strained in recent years over asylum seeker boats and spying and live cattle exports and the death penalty. How much damage has been done?

NADJIB RIPHAT KESOEMA: Well, Leigh, the relationship between the two very close neighbouring countries is always like that. You know, sometimes we are going up very highly, and then the next day, we are going down. But I think the two governments, the two people, the two officials of the – of both countries has trying – have trying very hard to resolve all of the problems. And then now we are going to the very good relations, we are going back to the path that we have to go to.

LEIGH SALES: What are Indonesia’s top priorities for this meeting?

LEIGH SALES: And where would you like to so or where do you consider that there is room for improvement in that regard?

NADJIB RIPHAT KESOEMA: Well, we can – well, both leaders, of course, they will talk firstly about the relations itself, and number two, about that relations in – economic relations, and number three is also I think people-to-people contact and also business-to-business. And of course we have also to realise that Indonesia and Australia is two most important player in this region. So that’s why I think the President and the Prime Minister will also discuss about the strategic matters that Indonesia and Australia can play in this region.

LEIGH SALES: Indonesia, as we know, hasn’t been happy with the current Australian Government’s policy on asylum seeker boats. Prime Minister Turnbull has shown no signs so far of making any changes to it. What changes would the Indonesian Government like to see in that area?

NADJIB RIPHAT KESOEMA: Of course, Indonesia would like very much to discuss it further. You know, because we see that about – this problem is not only Australian problem, this is also not only Indonesian problem, but this is the problem of us, the problem of the people around our region and also in the world now. So that’s why we have a special arrangement, what’s called Bali Process, where the countries of origin of those asylum seekers and boat people are coming and then also the transit countries like Indonesia and also the destinations countries like Australia.

LEIGH SALES: As I mentioned in the first question, we know that one of the sources of tension between Australia and Indonesia has been the difference in opinion over the death penalty and the case particularly of the two Australians earlier this year. That of course will continue to be an issue because there’ll probably always be more cases. From the Indonesian perspective, what is your position on that and how would you like to be able to move forward with Australia on that?

NADJIB RIPHAT KESOEMA: Well, Leigh, this is a – a legal issue. This is a legal issue in Indonesia. And I think it’s very important also that Indonesia to – to apply the legal process of this. As you know that Indonesia is one of the victim in – in drug trafficking. We – we were used by the traffickers as – not only as a transit country, but also as a destination country, so the threat to our young generation is very high, Leigh, so that’s why the Government of Indonesia put this very stern action, you know, to stop the drug illegal trafficking.

LEIGH SALES: And there’s no prospect that that policy would change any time soon?

NADJIB RIPHAT KESOEMA: We see that the discussion is always there. You know, the discussion among the scholars in Indonesia, among the academician, among the non-government organisations and I think this discussion, this debate will go on and will make a good – a future result. We don’t know where it will be ended, but I think it will be a very long and thorough discussion on this.

LEIGH SALES: Well ambassador, thank you very much for coming in this evening. We appreciate your time.

NADJIB RIPHAT KESOEMA: Thank you so much, Leigh. Thank you. See you again.