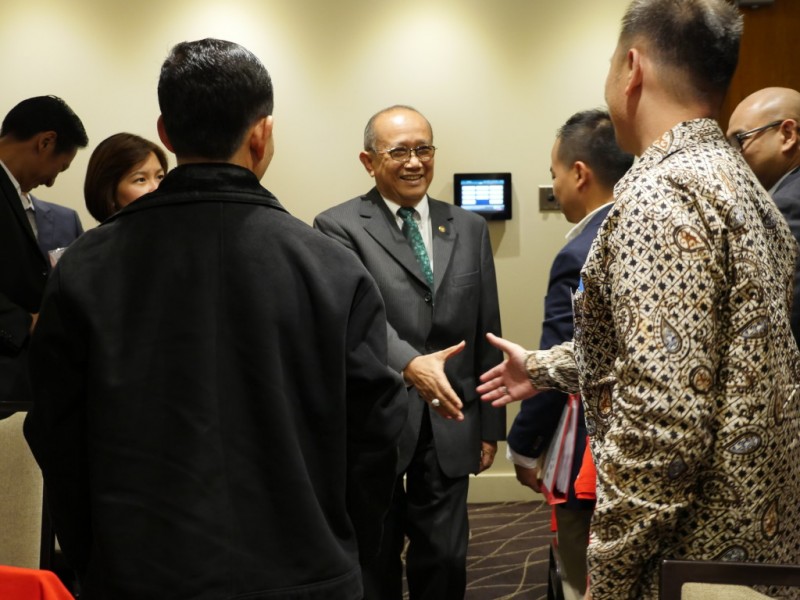 In an opinion piece published in The Australian, Indonesian Ambassador to Australia Nadjib Riphat Kesoema set a long-term vision for the Indonesia-Australia relationship.

Seventy years ago, just a few days after Japan surrendered to the Allies at the end of World War, II Sukarno, Muhammad Hatta and a number of Indonesia’s political activists declared: “We the people of Indonesia hereby proclaim the independence of Indonesia.”

It was a long and arduous journey for Indonesia’s founding fathers to reach that point. It took another four years of tough diplomacy and shooting wars to preserve the independence, keep the colonial forces at bay, win the hearts of the international community, and consolidate Indonesia domestically before Indonesia could start to move on and develop.

Australia has always supported us throughout the Republic’s early formative years. For instance, learning of their aggressive and reoccupation intent, the Australian maritime workers prevented hundreds of Dutch ships loaded with military arms and personnel from leaving their Australian ports to attack the Indonesian Republican Army in East Java. These “black bans” made it difficult for the Dutch forces to service and sail their ships, later described as a “Black Armada”, buying time for the fledgling Indonesian forces. After the loss of tens of thousands of Indonesian lives, Australia’s boycott of Dutch goods and trade, and international condemnation and pressure, the Dutch eventually understood the futility of their aggressive effort, accepted defeat and belatedly recognised the independence of Indonesia.

Since then, Australia has become one of our closest partners in the Asia-Pacific region. Australia and Indonesia have been developing and adapting the relationship to better meet modern challenges. We are members of many regional and global organisations such as Asia-Pacific Economic Cooperation, ASEAN Regional Forum, East Asia Summit, the G20 and the UN. Frequent engagements in multiple organisations build familiarity, understanding and trust. The Indonesia-Australia relationship will continue to evolve against the backdrop of a challenging and constantly changing regional and global environment. Just as World War II affected our lives and the destiny of our relationship, geopolitical tensions and conflicts in the neighbourhood as well as those in other continents today will affect our lives tomorrow.

In Europe, we are seeing a geopolitical tug of war at play. At stake for the great powers are economic, energy and geopolitical leverage in countries bordering the EU and extending well beyond that region to the Middle East. There is a risk that the international order in that region of the world will be less secure and less democratic. The condition in the parts of the Middle East and North Africa are continuing to become more vulnerable with armed conflicts resulting in humanitarian catastrophe spilling to many corners of the globe including to within our borders.

Nearer to our borders, in the Asia-Pacific, we are seeing the competitive quest for territory and natural resources. If left alone, it could take on a vicious spiral and tear apart the structure of the international framework that all countries in the region have for decades constructed and reinforced together. This structure is one of the pillars for stability that delivered relative peace to the region since the end of the Vietnam War and the formation of ASEAN in 1967. During the past five decades, we have seen strong economic growths that lifted hundreds of millions of people out of poverty, increased the average welfare of the people and for many countries created the right conditions for democracy, the rule of law, and better governance.

Indonesia and Australia are blessed together by geography and by our shared history. In the past two decades, we are brought even closer by our common core values of democracy, freedom of speech and an open economy. Taking a long-term and strategic viewpoint, Australia’s and Indonesia’s interests clearly converge, including for stability and sovereignty in the Asia-Pacific and an open economic regime. As we embark on to the next seven decades of Indonesia-Australia voyage, we should prepare a few things in the short-term.

First, build a resilient relationship. This requires both countries to expand the proportion of population that care and have an interest in Indonesia and Australia, including through the establishment of more and lasting Australia centres in Indonesia and new Indonesia language and culture classes throughout Australia. It requires more policy makers who are knowledgeable of and sensitive to the political and economic pulses of the two nations. It also requires us to invest more to grow and mature the partnership as equals with words and actions that carry more sincerity, that avoid lip service and eschew “megaphone” diplomacy.

Second, build and expand strategic sectors of cooperation. As two G20 members with a common border, a combined GDP on purchasing-power-parity of almost $US4 trillion ($5.4 trillion) and a combined population of 275 million, we should develop a more formidable economic relationship. We have to continue to lower barriers to trade and make it easier to invest in each other’s economy. Australia is suited to participate in Indonesia’s modernisation and expansion of the industrial, infrastructure, maritime, as well as innovation and creative sectors. We should continue to facilitate this through our regional and bilateral trade arrangements.

Third, strengthen regional institutions which serve as the framework of our security cooperation and contribute to our region’s stability and peace. We are fortunate to have many forums for our representatives at the highest level to routinely meet and have a dialogue on defence and security including in the many ASEAN meetings, APEC, East Asia Summit, and the G20. Australia and Indonesia should work in a partnership, making its good offices open to launch initiatives, facilitate a frank dialogue to reconcile any differences and to build trust among concerned members. We should also work together and continue to contribute in creating a peaceful and sustainable mechanism to manage conflicts in the region.

Navigating the Indonesia-Australia relationship can at times take us through difficult situations. But when we navigate it using that long-term viewpoint as a compass and are well-prepared for any short-term troubles, the destination becomes clearer and the journey less painful and more enjoyable.