In an effort to counter religious extremism in Indonesia and Australia, it is critical to understand how and in what ways formal schooling influences the radicalisation process and contributes to the development of extremist worldviews. Accordingly, this project sought to explore the crucial role of Indonesian Islamic school principals. Formal education that counters extremist thought and behavior most commonly centres on the teaching of civic values, citizenship, democracy, and tolerance. Yet imparting these values in schools does not necessarily mean that students have the ability to recognise radical or extremist propaganda. Schools may, through their systems of practice or curricula, unknowingly support or advance extremism.

In addition, this research sought to identify actions school principals can take that may impede the development of extremist belief systems through the development of a ‘Leading Against Extremism Framework’ that is applicable to the Central Java context. This framework can be retested in other areas in Indonesia and expanded to Australia in order to ascertain the influence culture may have on the development of religious extremism in educational settings.

After analysis of the data through open coding, the findings identified similarities and differences between mainstream and networked private Islamic schools. Islamic schools were similar in the following aspects: flow of authority; approach to punishment; use of direct instruction; expectation of rote memorization; infrastructure; and, policy environment.

Islamic schools differed via the following aspects: openness; integration between schools, communities, and society; interpretation of identity; and, view of diversity.

From these findings, we developed an Indonesia Islamic Education Continuum where we located aggregate mainstream Islamic and networked schools on continuums in terms of openness, integration, identity, and diversity. From these aggregate profiles, we identified an ‘extremism gap’ that shows disparities in leadership between mainstream Islamic schools versus network schools, which may influence potential drivers of radicalisation. 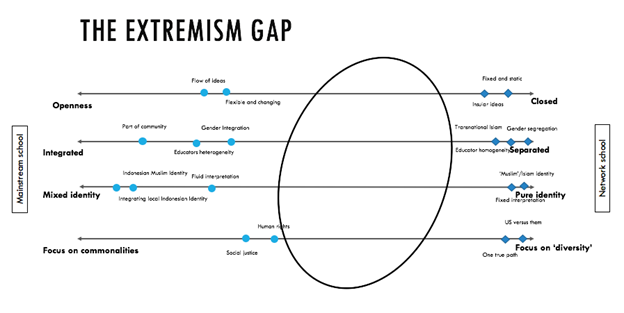 Mainstream school leaders supported schools that were more open and integrated. They hired teachers from various backgrounds and understood that people can have multiple identities alongside their Muslim identity.

Network Islamic school leaders led schools that were typically closed and segregated from community and society. They led schools that taught that the idea of having a pure ‘Muslim’ identity (as defined by the school) was essential to their life as Muslims.

They also led schools that taught students to see diversity as ‘the other’, different, not part of their group, and not following the proper religious path.

Several recommendations came out of the study for school leadership, for Indonesian Islamic schools, and to address issues of extremism in schools.

To address issues of extremism:

In the research dissemination, Dr. Melanie Brooks presented the research findings in a session attended by 20 Islamic school leaders and 15 Islamic education lecturers. The session was followed by a discussion on how to counter extremism issues in Islamic schools.

Islamic morality and challenges to democracy: A study of urban lower and middle class responses