Consulate-General of the Republic of Indonesia 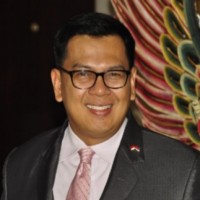 He joined the Ministry of Foreign Affairs of the Republic of Indonesia (MFA) in 1993. Since then, he has assumed responsibilities in various divisions of the MFA, including Head of the Secretariat for Special Envoys of the President (2004 – 2006).

Between June 2012 and June 2013, he was also serving as an expert to the Indonesian National Committee on the Vision of the Post-2015 Development Agenda.

He was also an Alumnus of the Clingendael Advanced Diplomatic Studies Programme, Den Haag, the Joint Programme SIPA Columbia University-UNITAR POCI on UN Studies, New York, and the Peace Operations and Conflict Resolutions Programme of the Institute of World Affairs, Washington, DC.

He was a regular speaker and resource person on foreign policy, diplomacy and public speaking at the MFA Education and Training Center and State Secretariat Training Center, as well as a visiting professor at the Department of International Relations, Padjadjaran University, Bandung (2010 – 2014).

He is a contributor to various journals and newspapers, including the Jakarta Post and the Jakarta Globe.

He is married to Irene Irjayanti Mulyana, and blessed with one son.