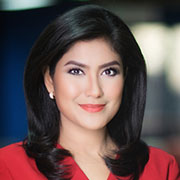 Valerina Daniel is a prominent Journalist and an Environment Ambassador in Indonesia, and a Former Advisor to the Indonesian Minister of Tourism for Sustainable Tourism Development. She is currently helping the Centre to focus on communications and women’s leadership.

As a Journalist for 19 years, Valerina has covered many stories from the devastating tsunami in Aceh and Sri Lanka to the US Presidential Election in Washington, DC. She has worked for National TV Stations in Indonesia, namely Metro TV, SCTV and the Berita Satu News Channel.

Since 2005, Valerina has been assigned by the Ministry of Environment and Forestry of Indonesia as the Environment Ambassador and Communication Advisor. She has published a series of environmental books titled “Easy Green Living” (2009), Children Books “I Love Earth” (2009) and “4 Super Bestfriends” (2016, 2017) to promote the issues of conservation, climate change and sustainable living.

Valerina graduated from Monash University, Australia majoring Master of Communications and Media Studies after receiving the Australian Leadership Awards in 2010, and earned her Bachelor of International Relations from University of Indonesia. She was an exchange student for the AFS Intercultural Program to the United States of America.

Because of her dedication as the Environment Ambassador and journalist, Valerina received the Indonesia Green Awards 2011 and the Australian Alumni Awards for Communications and Journalism 2011.