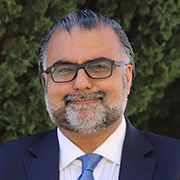 Tayyeb Shah is Deputy Vice-Chancellor (Global Partnerships) at The University of Western Australia and responsible for a portfolio that spans Global Engagement, Innovation & Industry Engagement, the Cultural Precinct and Development & Alumni Relations.

During his 12 years at King’s College London, Mr Shah was instrumental in expanding the university’s international and commercial partnerships. He was responsible for identifying, conceptualising and developing a number of strategic multi-million dollar projects which increased and deepened King’s College London’s worldwide engagement, particularly in China.

Educated at the universities of Oxford, Cambridge and the School of Oriental and African Studies (University of London) and Imperial College London, Mr Shah joined King’s College London after more than a decade in the commercial and creative industry sectors.

Mr Shah is a Fellow of the Royal Society of the Arts, member of a number of boards including the Perth Festival and Chair of the Professional Development Committee of the European Association for International Education.