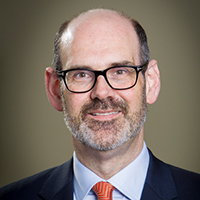 Simon Evans is a Professor in the Melbourne Law School and the University of Melbourne’s Pro Vice-Chancellor (International).

His scholarly work is as a comparative public lawyer, with broad interests in constitutional and administrative law, particularly in common law and Commonwealth countries. He holds an ARC funded Discovery Project grant to analyse the powers and accountabilities of the executive branch of government. He recently completed a major project investigating the capacity of parliaments to protect human rights and the effectiveness of the Commonwealth model of human rights protection. He has also worked on the implementation of the Victorian Charter of Human Rights. Other interests include constitutional property rights, accountability of executive government and constitutional theory. He was Director of the Centre for Comparative Constitutional Studies from 2005 to 2007 and Director of Teaching in the Law School from 2004 to 2006. He was a national finalist in the Australian Awards for University Teaching in 2005 and a Universitas 21 Teaching Fellow in 2006-7. He is a member of the Executive of the Australian Association of Constitutional Law.