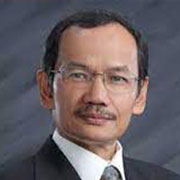 Prof. Ir. Nizam, M.S., DIC, Ph.D., IPU, Asean Eng. is a Professor and lecturer at Universitas Gadjah Mada (UGM). He was born in Surakarta, Central Java and cycling is his hobby. He gained his Doctoral degree from the Imperial College of Science and Technology, University of London, UK.

Many scientific journals have been published and many awards have been awarded to him.