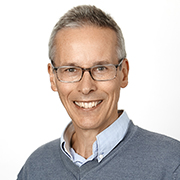 Professor Mark Wallace works in the Faculty of Information Technology at Monash University and is Associate Dean (Research).

Professor Wallace graduated from Oxford University in Mathematics and Philosophy. He worked for the UK computer company ICL for a total of 21 years, in between completing a Masters degree in Artificial Intelligence at the University of London and a PhD sponsored by ICL at Southampton University. For his PhD, he designed a natural language processing system which ICL turned into a product. He moved to Imperial College in 2002, taking a Chair at Monash University in 2004.

His focus both in industry and University has been on application-driven research and development, where industry funding is essential both to ensure research impact and to support sufficient research effort to build software systems that are robust enough for application developers to actually use.

He lead the team who developed the ECLiPSe constraint programming platform, which was bought by Cisco Systems in 2004. After moving to Australia he co-founded the research team developing a novel hybrid optimisation software platform called G12, and is currently involved in a commercialisation of this platform.

His research interests span different techniques and algorithms for optimisation and their integration and application to solving complex resource planning and scheduling problems. He was a co-founder of the hybrid algorithms research area and is a leader in the research areas of Constraint Programming (CP) and hybrid techniques (CPAIOR). The outcomes of his research in these areas include practical applications in transport optimisation

In collaboration with the Melbourne-based software company Constraint Technologies International, Professor Wallace has developed algorithms for airline and rail optimisation. He has also developed transport planning algorithms for VicRoads, and is a consultant for Melbourne Operations Research (MORe). Within Monash he is currently collaborating with the Institute for Railway Technology, and the Institute for Transport Studies, and leads the Monash node in a Collaborative Research Network with several Victorian Universities.