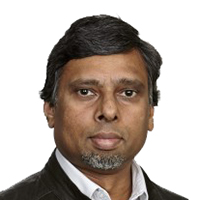 Professor Jayantha Kodikara’s expertise is in the areas of Geotechnical, Geoenvironmental, Pipeline and Pavement Engineering.

He received his BSc (Eng) degree (1st Class Honours and University Prize) from the University of Peradeniya, Sri Lanka in 1983 and PhD degree in Geotechnical Engineering from Monash University in 1989. His PhD was on the side resistance development of piles socketed into Melbourne mudstone. He worked on finite element analysis of soil-structure interaction problems, as a Post-doctoral Research Fellow at the University of Newcastle from 1989 to 1991. Then he worked as a Senior Geotechnical Engineer with Golder Associates Pty. Ltd., Melbourne, Australia from 1991 to 1994, where he was responsible for engineering analysis of geotechnical and geo-environmental problems, management of projects including development and maintenance of computer programs.

After joining Monash in 2001, he has developed vigorous research programs into both fundamental and applied research in civil engineering. The fundamental research areas include modelling of unsaturated soil behaviour, atmosphere/ground/structure interaction, and soil and rock fracture and water flow. The applied research areas fall mostly in the themes of infrastructure resilience and energy, which include on-shore and off-shore pipelines, road pavements and smart monitoring using fibre optics. He has published about 200 technical papers on a diverse range of topics. He has attracted about 20 million dollars in external and internal research grants, during his 20 year tenure as an academic. He has supervised successfully over 15 PhD students, some of whom are university lecturers and scientists in research organisations and principals in consulting companies.

He is a Fellow of Institution of Engineers Australia and a Chartered Professional Engineer in Australia. He is an Associate Editor in Canadian Geotechnical Journal and the Journal of Environmental Geotechnics. He is also the technical leader of global project on Advanced Condition Assessment and Pipe Failure Prediction Project