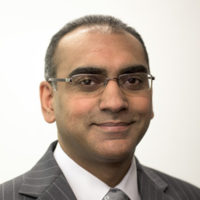 Professor Khan has a track record for innovation, particularly for linking industry and university research. In 2006, he conceptualised and established the Melbourne Centre for Nanofabrication, overseeing cross-disciplinary teams from Monash and its partners. In 2010, he led the strategy and initial development design of the Green Chemical Futures facility.

During this time, he was responsible for all stages of development – from initial strategy and fundraising to implementation.  In his previous position as Senior Research Strategist under the Provost, Professor Khan contributed to new operating paradigms, which improved Monash research performance and rankings.

Prior to working in Australia, Professor Khan was Deputy Director of the London Centre for Nanotechnology, an operations and strategy expert with Booz Allen and Hamilton (USA), and a researcher with the University of Oxford.

Professor Khan embraces innovative international models of engagement. He has been instrumental in the establishment of the Monash-Warwick Alliance, as well as Monash’s unique partnerships with Indonesia, the Middle East, Europe, Latin America and beyond.