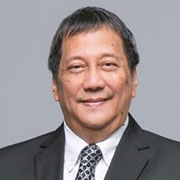 Prof. Wihana Kirana Jaya is the Special Staff for Economic Affairs and Transportation Investment to the Minister of Transportation of the Republic of Indonesia. Previously, Professor Wihana served as the Dean of the Faculty of Economics and Business at Universitas Gadjah Mada (UGM) from 2012 to 2016, Deputy Dean for Collaboration and Business Development, UGM from 2009 to 2012, and Director of the Center for Economic Studies and Public Policy, UGM from 2005 to 2008.

Professor Wihana was appointed to the Board of Commissioners Members of PT Pelabuhan Indonesia IV in 2017. He has also been appointed as a Commissioner of PT Angkasa Pura I in 2020. Professor Wihana obtained his Bachelor of Economics from Universitas Gadjah Mada, Yogyakarta, Master of Social Science from the University of Birmingham, and a PhD from Monash University, Australia.