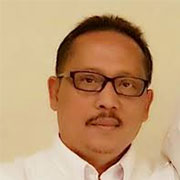 Prof Ocky was part of the Expert Team at the CTI-CFF National Secretariat (Coral Triangle Initiative-Coral Reef, Food and Fisheries), and member of the Research and Development Commission at the Ministry of Marine and Fisheries (2013).

Prof Ocky published several scientific papers in national and international journals. He is a recipient of several awards by national and international organizations, including: Collaborative Development Award (CDA) by British High Commission Singapore, British Council (2013); Biovision Catalyzer Award on Biodiversity, Climate Change and Agronomy, at the Biovision the World Life Science Forum, France (2013); Equipment Award from the German Ministry of Economic and International Cooperation, Germany (2007 and 2014); Cipta Lestari KEHATI Award from the Indonesian Biodiversity Foundation (KEHATI), Indonesia (2006). The 2013 Five-Year Biology Award, from the Faculty of Biology at Universitas Soedirman was given to him for his dedication and achievements in the development of science and society.

Prof Ocky is an alumnus of the Faculty of Biology, Jenderal Soedirman University in 1989. He completed his MSc program in Microbiology from Ontario, Canada in 1994 and obtained his PhD program in Marine Microbiology at the Department of Aquatic Biosciences, University of Tokyo, Japan.