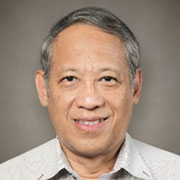 Born in Bandung, he obtained his Bachelor’s degree in Civil Engineering at the Bandung Institute of Technology in 1977 and completed his education in Docteur Ingenieur de Genie Civil at the Institute Nationale des Sciences Appliquees (INSA) Lyon in France in 1985. He became a member of the board of the National LPJK as Chairman for Research and Development Committee in the period 2011-2015, then became Deputy Chair-2 for Research and Development, Education and Training and Foreign Cooperation, National LPJK in the 2016-2020 period. In addition, he is also a member of the Indonesia Monitoring Committee for Engineering Services (IMC) from 2013 to 2022.

His publications include the development of the construction industry and its human resources, disaster mitigation and post-disaster recovery, as well as business continuity planning. As a member of IAMPI, he hold a Senior Project Management Certificate. Heis also a holder of certificate for dispute resolution mediator and is a registered Expert Appraiser at LPJK (National Construction Services Development Board).