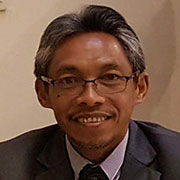 Professor Budu is a core member of South Sulawesi Governor’s Team for Development Acceleration (TGUPP Sulsel). He is a professor in ophthalmology at The Faculty of Medicine, Universitas Hasanuddin.   He has been serving as Dean of the Faculty since April 2018. Since 2019, Professor Budu has served as the Chairman of the Indonesian Medical Institution Association, covering 91 medical faculties throughout Indonesia. He was the Vice Rector for Research, Innovation and Partnership Affairs, Universitas Hasanuddin (2014-2018); Dean for the School of Medicine, Muhammadiyah University (2008-2012); and Vice Dean of Academic Affairs at the Faculty of Medicine at Universitas Hasanuddin (2012-2014).

Upon completion of his Medical Doctor at the Faculty of Medicine, Universitas Hasanuddin (1993), he worked in Primary Health Care (1993-1996) before joining PhD Program at the Faculty of Medicine at Toyama Medical and Pharmaceutical University in Japan (1998-2002). He studied molecular genetic diseases of the eye (as rhodopsin gene and peripherin/RDS gene mutations in patients with retinitis pigmentosa) and did relevant publications. He also has a master’s degree in medical education.

Prof Budu is also actively involved in professional organisations. He was the Chairman of the Indonesia Ophthalmology Society (PERDAMI), South Sulawesi chapter for 2008-2012. During this period, he oversaw the program for preventing blindness, particularly blindness patients in rural areas of Sulawesi, which was well supported by the Ministry of Health.