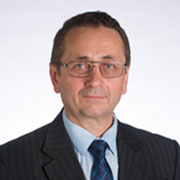 Professor Alexander Babanin obtained a Bachelor of Science (Physics) from the Lomonosov Moscow State University in Russia in 1981; a Master of Science in Physical Oceanography in 1983 and a Doctor of Philosophy in Physics and Mathematics in 1990.

He worked in the Marine Hydrophysical Institute, Sebastopol (Russia) before relocating to Australia in 1996.

He is a Fellow of the Institution of Engineers Australia (FIEAust).

He has produced more than 300 publications.