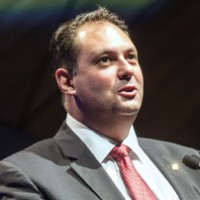 Philip Dalidakis was born in the Southern Metropolitan Region and has lived here all his life. His father was born in Greece. His mother was born in Shanghai, the daughter of Jewish refugees from Nazi Germany. As the son of immigrant parents, he shares the life stories of many families in his electorate. Philip now lives in Bentleigh with his wife Debra and three young children, who attend local state schools.

Philip was educated at Gardenvale Primary School, St Michael’s Grammar School, Monash University and the University of NSW. He has a master’s degree in Commerce and a double degree in Business (Management) and Arts (politics and Thai language). He speaks Greek and Thai.

Philip has worked in both the private sector and in government. He worked as an analyst with Deloitte, as a senior property accountant with Centro Properties Group, and as a financial controller with Boston Umbrella. He was chief executive officer of the Victorian Association of Forest Industries from 2007 to 2011. In government, he was deputy chief of staff to Senator Stephen Conroy, Minister for Broadband, in 2011-12. From 2012 to 2014 he ran his own business, SCG Advisory.

Philip has been active in many community organisations. He has been treasurer of the Jewish Museum of Australia, treasurer of SKA Children’s Services Inc, and a Homework Support volunteer with Southern Ethnic Advisory and Advocacy Council. He was a judge with the Melbourne Awards for the City of Melbourne from 2008 to 2014.