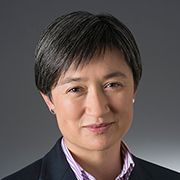 Senator the Hon Penny Wong is a Senator for South Australia, the Senate leader of the Australian Labor Party (ALP), the Shadow Minister for Foreign Affairs and Leader of the Opposition in the Senate.

Prior to her career in parliament, Wong worked at the CFMEU, in the National Executive of the National Union of Students and a lawyer and political advisor. She graduated from the University of Adelaide with Bachelor degrees in Arts and Laws.