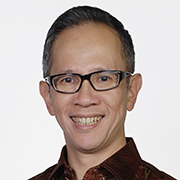 He graduated with a Bachelor degree in Economics from University of Indonesia in 1986, and received a Master in Economics from Monash University in 1991. Mahendra joined the Ministry of Foreign Affairs in 1986 and was assigned to various postings including Economic Third Secretary of the Indonesian Embassy in London (1992-1995) and Information Counsellor of the Indonesian Embassy in Washington DC (1998-2001).

He joined the Coordinating Ministry in late 2001 as Special Assistant to the Minister. He served as Deputy Minister in charge of International Economic and Financial Relations in May 2005 and then as Chairman and CEO of Indonesia Eximbank from September 2009 until December 2009. He was appointed as Vice Minister of Trade by President Susilo Bambang Yudhoyono on 11 November 2009.

Before his appointment as the Chairman of BKPM, Mahendra had served as Vice Minister of Finance since 19 October 2011. He was also the Asia representative at the UNFCCC Adaptation Fund Board between 2007and 2009 and President Yudhoyono’s “sherpa” to the G20 Summit in London in 2009.