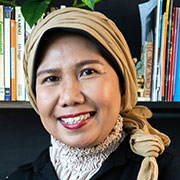 Lily Yulianti Farid is a published author and art event producer with expertise in cultural links between Australia and Indonesia. She also serves as the current Director of the Makassar International Writers Festival, a position held since 2011.

She started her career as a journalist for Kompas, a leading newspaper in Indonesia in 1995 and later expanded her career into academic and creative fields, teaching Indonesian literature (on casual basis) as well as working for academic research projects and publications at the University of Melbourne from 2014-2019. Lily is a Postdoctoral Fellow at the Monash Indigenous Studies Centre.

Before pursuing her PhD, Lily worked as a journalist who has main interest in gender issues. She worked for leading media companies including Australian Broadcasting Corporation (Radio Australia and Online News, Indonesian Service), Radio Japan, Japan Broadcasting Corporation, and Morning Daily Kompas, Indonesia. Lily has focused her research on the representations of gender in Indonesian media for her MA and PhD, however, during her time at the University of Melbourne and as a creative writer she has expanded her interest in women’s positions in politics and in Indonesian society as portrayed in contemporary literature and the historical relationship between Makassar and Indigenous Australia.

For more on the Makassar International Writers Festival, head here.