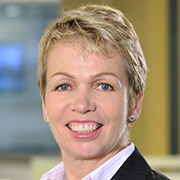 Leonie was previously Chief Operating Officer, ANZ Indonesia, based in Jakarta from 2008 until 2014, and was a Vice-President of the Indonesia Australia Business Council from 2010 until 2014. She was previously Head of Risk, International Partnerships, ANZ.

Prior to joining ANZ, Leonie was a management consultant, advising clients in the Financial Services, Manufacturing and Telecommunication sectors. Her career also includes executive roles in manufacturing industry, based in both Australia and Asia. Leonie holds a PhD in Business Studies and a Master’s Degree in Applied Science.