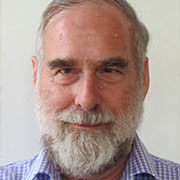 After working for international NGOs in India and Nepal for 25 years, he joined the UK Government’s Department for International Development (DFID) in 1999, where he worked until 2012 covering postings in Bangladesh, Nigeria, China, Cambodia and Vietnam. Throughout this time he managed DFID’s health programs in these countries, as well as other “human development” programs including education, WASH and disaster response.

From 2007 to 2012 these roles included technical oversight of DFID’s health program in Indonesia. He received the Vietnam Health Medal for his work on HIV and AIDS control.

From 2012 to 2016 he worked for the Australian Government (first AusAID and then DFAT) in Indonesia as the Director of the health section. After a spell managing a large multi-donor education program in Tanzania, he returned to take on the leadership of AIHSP in Indonesia in April 2020.

He originally studied Natural Sciences (physics major) at Cambridge University and later completed an MBA with specialisations in human resources management and management in developing countries from the University of Wales (1991). He was awarded the Sir Julian Hodge Prize for the best overall performance on the MBA. He has also completed several post-graduate courses in epidemiology. He is currently based with his wife and two children in Melbourne.