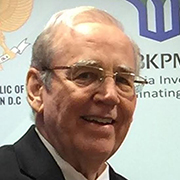 James Castle is the founder of CastleAsia, established in Jakarta in 1980 in association with PT Jasa Cita. CastleAsia manages the Indonesia Country Program (ICP), the largest and most prestigious CEO forum in the country.

In over thirty-five years of work in South-East Asia, James has advised in the establishment of numerous foreign direct investment projects. He has acted as a consultant to many of the world’s largest corporations as well as many of Indonesia’s and South-East Asia’s largest business groups.

In addition to his experience with private sector clients, James has also been a consultant to numerous projects for governments and international agencies including the World Bank, IFC, ADB, USAID and the Indonesian Government. He is an Honorary Professorial Fellow at Monash University and was an Adjunct Professor at Johns Hopkins School of Advanced International Studies in 2008 and 2011. He was appointed by the Minister of Finance as the only non-Indonesian member of the Indonesian National Team to Review Tax Law Changes in 2005. He was one of two foreigners appointed to Indonesia’s Tripartite Forum on Industrial Relations in 2001.

James earned a Master’s Degree from the University of Hawaii (1972) as an East-West Center student and a Bachelor’s Degree from the University of Michigan (1968). As a PhD candidate from Cornell University, he conducted research as a Fulbright Doctoral Research Scholar at Universitas Pajajaran (Bandung, 1977) and the Koninklijke Instituut in The Netherlands (Leiden, 1976). He was an East-West Center visiting scholar at Mindanao State University, Philippines (1972), and Gajah Mada University, Indonesia (1973). He was a USAID intern in Washington DC in 1974.

He has lived in Indonesia since 1977 and is fluent in Indonesian. He was born in Michigan, USA.