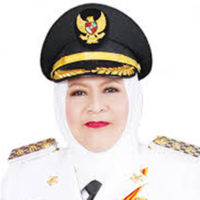 Ibu Nurhayanti is the current Mayor of Bogor Regency after being elected as Deputy Mayor in 2013. She begun her career in public service in 1984, and has worked in government through a number of roles within Bogor.

Ibu Nurhayanti was recently named as the Best Female Mayor in Indonesia at the Women’s Obsession Awards 2017. She also received recognition from the Indonesian Red Cross for her consistent humanitarian work over the past two decades.