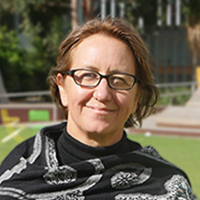 Helen Fletcher-Kennedy is Chief Operating Officer at the Australia-Indonesia Centre.

Helen has nearly 30 years experience in operational and strategic management within the Australian higher education sector, including twelve years in the International HE sector.

Helen has considerable experience managing in cross-cultural settings. Most recently this has included the establishment of the Yulendj Indigenous Engagement Unit at Monash University, where she was Director from 2011 to 2017. She was also involved in the establishment of the University’s Centre in Prato Italy in 2001, and recently spent six months in Italy, managing the Centre.

Helen has an MPsych (Counselling) and an MA (Asian Studies) from Monash University. Indonesia and international relations were the major focus of her MA, during which she published ‘The Archipelagic State and full recognition of Indonesian National Independence, Indonesian Quarterly, Vol. XXII, No. 2, 1994‘.

Notes from South Sulawesi: On road and rail from Makassar to Parepare