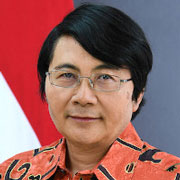 He graduated in law from Airlangga University in Surabaya. He undertook postgraduate studies at Monash University in law and later completed a PhD in political science from the Australian National University.

Ambassador Pramono presented his credentials to the Governor-General of Australia in Canberra on 8 December 2021.