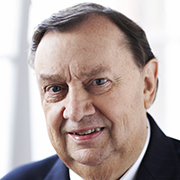 Harold Mitchell AC is the founder of Mitchell & Partners and former Executive Chairman of Aegis Media Pacific. Mitchell & Partners, the company he founded in 1976, is the largest media and communications group in Australia, with a growing presence in New Zealand and across the Asia-Pacific region.

In December 2000, he launched the Harold Mitchell Foundation to promote health and the arts in the community. The organisation has since provided over $6 million in grant funding to over 100 different organisations.

Harold is currently Chairman of CARE Australia, the Melbourne Symphony Orchestra, Television Sydney, University of Western Sydney’s television service for Greater Sydney, Florey institute of Neuroscience and Mental Health, and Art Exhibitions Australia. He is the Vice President of Tennis Australia and Director of Crown Limited and New York Philharmonic. In previous years, he has been Chairman of the National Gallery Australia, President of the Melbourne International Festival of Arts, President of the Museums Board of Victoria and a board member of the Opera Australia Council.

In 2010, Harold was appointed Companion of the Order of Australia for eminent service to the community through leadership and philanthropic endeavours in the fields of art, health and education and as a supporter of humanitarian aid in Timor-Leste and Indigenous communities.