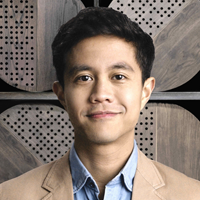 Ghian Tjandaputra is the Partnerships Coordinator of The Australia-Indonesia Centre. He manages the Centre’s leadership programs, facilitates cultural exchanges, and connects key stakeholders in innovation ecosystems from both nations.

He co-founded Krakatoas FC, an Australian rules football community of Australians and Indonesians based in Melbourne. He was AFL Multicultural Community Ambassador for Richmond FC and most recently he was part of Indonesia Garudas team at AFL International Cup 2017.

Ghian has represented Indonesia in international youth forums, including as an ambassador for G20 Youth Summit, British Council Global Changemakers and the Study of the United States Institute, hosted by the U.S. State Department. At 19, he was the youngest Indonesian delegate in UNFCCC COP 15 in Copenhagen, working for the Assistant Minister of Environment for International Cooperation. He completed his studies in international relations and journalism at Monash University.

The Australia-Indonesia Centre to partner with South Sulawesi Government