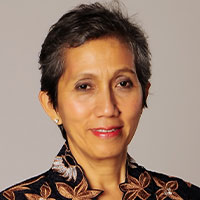 Ms Salim has spent more than 30 years in finance and banking. She is currently a member of the Board of Directors of Indonesia Eximbank, a special mission vehicle under the Ministry of Finance. She is also chairing the Risk Management Committee of this institution.

From 2004-2015, she served as Vice President Director of PT Bank Negara Indonesia, one of Indonesia’s largest state banks. With her leadership, the bank introduced ESG criteria into the bank’s credit model which received numerous awards in sustainability. She held other notable positions as Managing Director of the Jakarta Stock Exchange and at the height of the Asian Crisis in the late nineties, she served as Deputy Chairperson of The Indonesian Bank Restructuring Agency, after an assignment as Head of the Secretariat for the Financial Sector Policy Committee.

Ms Salim actively supports not-for-profit initiatives and has been instrumental in co-founding and developing several key organizations, such as the Partnership for Governance Reform of Indonesia (Kemitraan), the TIFA Foundation; and The Transparency International Indonesia for which she is currently chairing. These organisations cover a wide range of initiatives: from working with communities, multi-sector governance reform and active participation in policy change.

Alongside her governance work, she has been deeply engaged in sustainability-climate emergency, land use and food safety-security. Her active engagement are through key organisation both national and international: as advisory board member of Econusa; and as member of the Board of Directors in the Climate and Land Use Alliance (CLUA), the Global Alliance for Improved Nutrition (GAIN) and the AndGreen Fund. Through these engagements her work covers Asia, Africa and Latin America.

As Co-founder of ESAS (Empu Sendok Arts and Science), over the last five years, Felia has been working through the MIT Global Program delving into systems transformation addressing leadership in climate change.