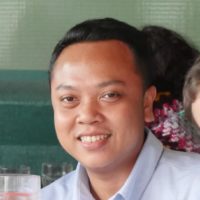 Febi has been Indonesia Research Officer at the Australia-Indonesia Centre, based in Jakarta, since 2018.

Prior to that he served as a research assistant at Institut Teknologi Bandung (ITB) from 2016 to 2018, assisting the finance department by conducting academic research and a research collaboration with Yamaguchi University and conducting workshops on panel data regression and analysis for final year students. He also worked as a freelance analyst for various startups, including What3words and Ravenry.

Febi has represented ITB and Indonesia at international conferences and exchange programs, including as a student delegate at the International Conference for the Integration of Science, Technology and Society (ICISTS), hosted by the Korea Advanced Institute of Science and Technology (KAIST), and the Japan-East Asia Network of Exchange for Students and Youths (JENESYS), hosted by the Japan International Cooperation Center (JICE).

He has a Bachelor of Science and a Masters of Science specialising in Management from ITB.

On top of his research role, Febi is responsible for the majority of the English-to-Bahasa Indonesia translations found on the AIC, Digital Economy, Skills Futures, and ReelOzInd websites.

Bukalapak: innovation is key for developing tech talent and businesses

Indonesia’s domestic flight industry: the impact of a duopoly