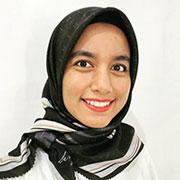 Evelynd pursued her Master of Communications and Media Studies at Monash University. During her time in Melbourne, she was a professional intern at the Australian Broadcasting Corporation in International Development division and sought professional experiences in digital media. Actively involved in bilateral organisations, she was the President of Australia Indonesia Youth Association (AIYA) West Java chapter, and currently as the Communications Lead for Conference of Australia Indonesia Youth (CAUSINDY).

Prior to the role in The Australia Indonesia Centre as Digital Content Producer, Evelynd worked as a Junior Lecturer at the Faculty of Communication Sciences at Padjadjaran University, Bandung, where she specialised in journalism, television and film studies. She was recently chosen as one of the pioneering team members at the Universitas Negeri Padang for the opening of the Communication Science study program. She is currently developing Sumbar Connect, an online activism platform for youth and communities in West Sumatera as part of her passion for connecting local potential in education, entrepreneurship, social and cultural activities for a greater impact on society.