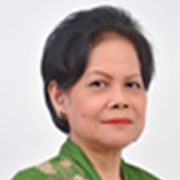 Erna Witoelar is the former UN Special Ambassador for Millennium Development Goals (MDGs) in Asia Pacific (2003-2007); Indonesian Minister of Human Settlements and Regional Development (1999-2001), and President of the Consumers International (1991-1997). She was also a member of the Global Commission on Legal Empowerment of the Poor (2006-2009); and Commission on Global Security, Justice & Governance (2014-2015).

Erna is also the founder and leader of several civil society organisations from local to global levels, such as the Indonesian Environmental Forum (WALHI), the Indonesian Consumers Foundation (YLKI), the Partnership for Governance Reform in Indonesia (KEMITRAAN) and the Asia Pacific Water Forum (APWF).

She is the founder and a Governing Board Member of the Indonesia Biodiversity Foundation (KEHATI). As Co-Chair of the Indonesian Philanthropy Association (FI) in 2015, she was instrumental in the formation of the Philanthropy and Business for the Sustainable Development Goals Network in Indonesia. In 2018 she co-founded a startup company “Partnership.ID”, that facilitates sustainable partnership and collaborative engagement.

She served on the China Council for International Cooperation on Environment and Development (CCICED) based in Beijing (2012-2016). She also co-founded the Collaborative Australia-Indonesia Program on Sustainable Development and Climate Change, between Universitas Indonesia, Universitas Hasanuddin and Griffith University in 2017.

Erna graduated in Chemical Engineering from Bandung Institute of Technology in 1974, and completed her postgraduate study in Human Ecology at Universitas Indonesia in 1993. She was awarded an Honorary Doctorate by Griffith University, Brisbane, Australia in 2019.