National Team for the Acceleration of Poverty Reduction (TNP2K) 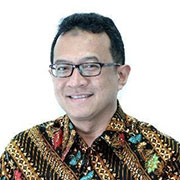 Dr Elan Satriawan is an Associate Professor in the Department of Economics, Universitas Gadjah Mada in Yogyakarta, Indonesia. He is also Chief of the Policy Working Group, a policy think tank under the National Team for the Acceleration of Poverty Reduction (TNP2K), which sits under the Office of the Vice President (2015-present). In the past, he was the Lead Evaluator in the Monitoring and Evaluation Unit of TNP2K (2010-2014), Senior Research Fellow of Jameel Poverty Action Lab/JPAL-MIT (2008-2009), and was a Consultant for the World Bank (2007-2009). Associate Project Director, Indonesia Family Life Survey, Wave‐3 (RAND Corp. and Gadjah Mada University (2000-2002). He obtained his PhD from Michigan State University (2009).

His research interests cover a range of topics in microeconomics, particularly the impact evaluation and effectiveness of anti-poverty and social programs, poverty-related issues including nutrition and health, education and inter-linkages between the two. Currently, he is studying the cause of malnutrition and its long-term impact on adults, including on education, cognition, and labor market outcomes. In addition, at TNP2K, he evaluates the effectiveness of various social protection programs and, collaborating with JPAL, he conducts randomised evaluations on the impact of programs that hand out cash or e-vouchers for food instead of food itself.

Dr Satriawan published his research in scientific journals and academic books and is a frequent speaker at national and international forums.