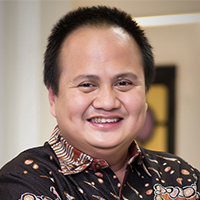 Dr Budi Wiweko is a Research Manager of Faculty of Medicine Universitas Indonesia and also a Supporting Manager for Yasmin IVF Clinic – Jakarta.

After graduating as a specialist in Obstetrics and Gynecology from Universitas Indonesia in 2005, he spent his time as a research fellow on ovarian tissue vitrification and in vitro culture of follicles at Hyogo College of Medicine Japan. He continued his research on basic laboratory on ART and had some clinical IVF training in Osaka, Barcelona, Thailand and Vietnam. He completed his PhD thesis on ‘Pre-antral follicle vitrification’ in Faculty of Medicine Universitas Indonesia in 2014.

Budi is major contributor to development in the  IVF field in Indonesia since he is one of the founder of Indonesian Association for In Vitro Fertilization (IA-IVF) which was founded in 2009. Instead of giving services, he is also a coordinator of trainer for Subspecialty in Reproductive Endocrinology and Infertility Fellowship which is conducted in Teaching Hospital Universitas Indonesia.

He is the one of AMH expert in Asian region since he developed AMH normogram and AMH based iCOS formula which is very important for daily practice on infertility. His researches about AMH, iCOS, and ovarian tissue vitrification were published in local journal and international journal and also conference of ART such as ASPIRE, ESHRE and IFFS annual meeting. Up to now, he has published 21 original articles on international journal (indexed in pub- Med and Scopus).