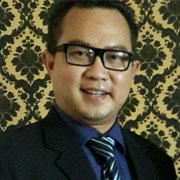 Dr Arif Satria is the Rector of Institute Pertanian Bogor (IPB), or IPB University. He is a lecturer of FEMA IPB since 2010, after previously serving as a lecturer in the Department of Fisheries Social Economics. He also is an adviser to the Minister of Marine Affairs and Fisheries in 2012. Dr. Arif has been actively involved in drafting of marine and fishery policies since 2002, including the Fisheries Law 31/2004, the Revision of the Law on the Management of Coastal Areas and Small Islands, the Preparation of the Blue Economic Concept as well as a number of Government and Ministerial Regulations.

He has served as a Visiting Fellow at the University of British Columbia, Canada.

He received his undergraduate degree majoring in Social Economics, Faculty of Agriculture (IPB), then continued his master’s degree in Rural Sociology of IPB and earned his Doctorate degree at Marine Policy of Kagoshima University, Japan.