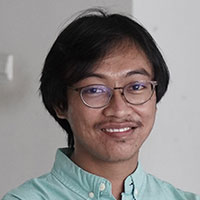 Prior to that role, Dias was involved in the research consortium “Ground Up: A practice based analysis of groundwater governance for integrated urban water resource management in Semarang”. In this consortium, he joined researchers from the Universiteit of Amsterdam, IHE-Delf, Katolik Soegijapranata University, Diponegoro University, Amrta Institute and KRuHA including the Department of Politics and Government.

Before that, Dias involved in various research projects. One of them, in 2015-2017, Dias was involved in a project called Power, Welfare and Democracy (PWD), which was a joint program between the Department of Politics and Government at UGM and Oslo University, Norway. During this period, Dias was the assistant for Dr. Haryanto – lecturer in the Department Politics and Government.

Aside from that, Dias is also an editor for some books. Recently, he edited a book entitled “Environmental Discourse and The Political Movement Against Tin Sea Mining in Belitung” (forthcoming). This book will be published by PolGov.