Associate Professor in the Faculty of Fine Arts and Music 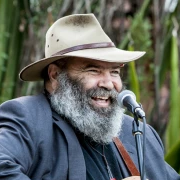 Richard Frankland is a proud Gunditjmara Man who lives on country in southwest Victoria. His lifelong work has been to facilitate the voice of Indigenous Australians via his many public personas. His roles include an Investigator for the Aboriginal Deaths in Custody Royal Commission, fisherman, musician, author, writer for live theatre, screenwriter, director of stage and screen, theatrical producer, CEO, keynote speaker for theatrical institutions, workshop facilitator and keynote speaker on Indigenous issues including lateral violence, cultural safety, and community capacity building, and most importantly, family man.

At the University of Melbourne, he served as Head of the Wilin Centre for Indigenous Arts and Cultural Development and as Associate Dean (Inclusion & Diversity) and is currently an Associate Professor in the Faculty of Fine Arts and Music over cross disciplines. Despite leaving school at the age of 13, Richard has notched up many academic achievements. In 2007 he completed his Master of Arts at RMIT University with a thesis entitled ‘The Art, Freedom and Responsibility of Voice’ and in the same year published his first novel, Digger J Jones. This year Richard completed a Higher Doctorate Degree in Visual and Performing Arts at the University of Melbourne based around a dissertation on his life’s achievements and contributions towards Indigenous Australians’ cultural and community foundations.