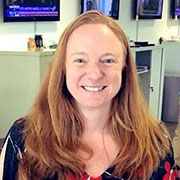 Ms Alison Duncan has been Minister-Counsellor at the Australian Embassy in Jakarta since December 2018.  In that capacity, she oversees the economic, trade and investment policy work of the Embassy, as well as the Embassy’s flagship economic governance and infrastructure development programs.

Prior to her posting to Jakarta, Ms Duncan was Counsellor then Deputy High Commissioner at the Australian High Commission in Wellington, New Zealand (2015-18). She has also served as Deputy High Commissioner to the Solomon Islands (2008-11) and as Third Secretary in Jakarta (2003-06). In Canberra, Ms Duncan established a Pacific Strategy Unit to bring together the foreign policy and development aspects of Australia’s engagement with the Pacific following the integration of the Department of Foreign Affairs and Trade with the Australian Agency for International Development in 2013. She has also worked in DFAT’s Counter-Terrorism Branch and as Director of Solomon Islands Section.