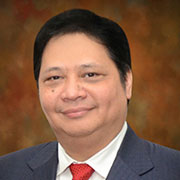 Airlangga Hartoto is the current Coordinating Minister for Economic Affairs in President Joko Widodo’s Onward Indonesia Cabinet. He was also part of Jokowi’s previous cabinet as Industry Minister. Airlangga first became a politician in 2004 and is the current chairman of the Golkar Party.

Aside from his career in politics, Airlangga is also well established in business, and has held numerous corporate roles in industries including fertiliser distribution, paper packaging and construction machinery.