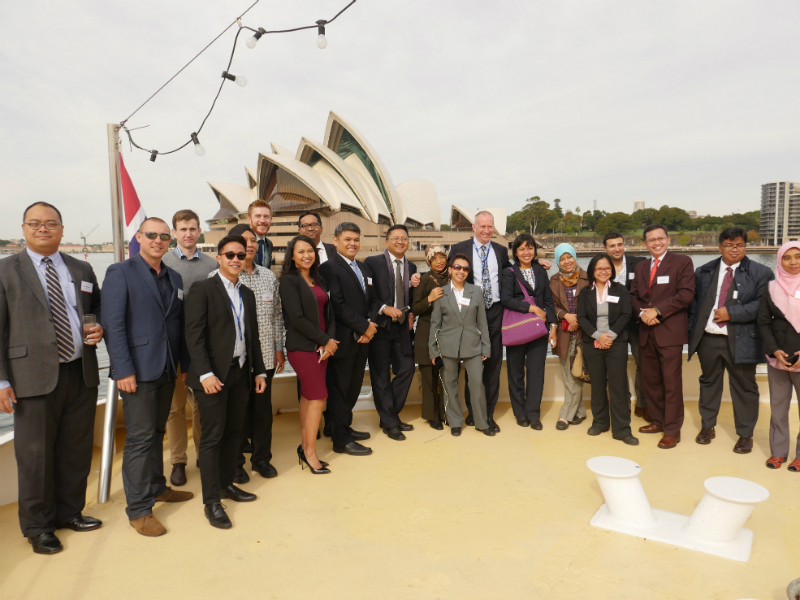 Some of Indonesia’s most progressive and inspirational leaders in the fields of diplomacy, trade, energy, academia, think-tanks and community service have demonstrated why their nation is one of the most dynamic emerging markets.

The leaders – taking part in the Australia-Indonesia Centre’s (AIC’s) third Australia-Indonesia Leaders Program in Sydney, Canberra and Melbourne in the second half of May – impressed audiences with their passion for knowledge, collaboration and innovation.

The Leaders Program, guided by the themes of Economic Diplomacy, Innovation and Energy, brought together Indonesian and Australian leaders for 10 days to take part in leadership-development courses at four of Australia’s top universities, meet and engage with business leaders and former ambassadors, debate pressing ideas in workshops, and spend time together experiencing Australian culture in May.

“While a primary goal of the Leaders Program is to support the AIC’s collaborative research activities, the relationships that are formed go much deeper,” says AIC Director Paul Ramadge.

The Australia-Indonesia Leaders Program was launched in 2014 with the assistance of the Indonesian Ministry of Foreign Affairs. “We are very pleased to see the way it has evolved over these last 18 months,” says Director for Senior Diplomatic Training (Sesparlu), Odo Manuhutu.

“This second year and the third iteration of the program is arguably the best so far, with Australian participants joining the discussions throughout the program, a prominent Indonesian University taking part in giving the lectures for a day, and Indonesia’s Foreign Ministry bearing some of the costs of the visit.

“The fact that most class material is paperless and there is now an AILP App is icing on the cake for this most modern of second-track diplomacy tools.”

Since its launch, about 90 people have taken part in the program. They will stay in touch via WhatsApp groups and a soon-to-be-released alumni site.

The third Leaders Program brought together 28 delegates – for the first time from both nations – from Australian and Indonesian government ministries, the education sector, private enterprise, think-tanks and the media.

The group also attended receptions with:

A strong cultural program underpinned the formal schedule with delegates participating in excursions to Sydney Harbour, Tesla Motors, an AFL match, and a trip to Cape Schanck on Victoria’s south coast. “The photos alone can show the meaningful discussions spiced with discoveries of the real Australia that most Indonesians don’t know about,” Odo Manhutu says. “But nothing compares to seeing all this interaction in person: the exchanges of views, the fun at an Aussie Rules game at the MCG, seeing kangaroos hop alongside the group bus, and so much more.”

“I think it’s fair to say that the Leaders Program has once again reinforced the great positives and goodwill that exists between Indonesia and Australia,” says Paul Ramadge. “The participants were a highly engaged, smart group who will, I’m sure, be ambassadors for the relationship and for shared innovation.”

“Cities should be safe, connected, caring and fun”: The City of Melbourne hosts the Australia-Indonesia Leaders Program

Back to the future: First Australians welcome the Australia-Indonesia Leaders Program