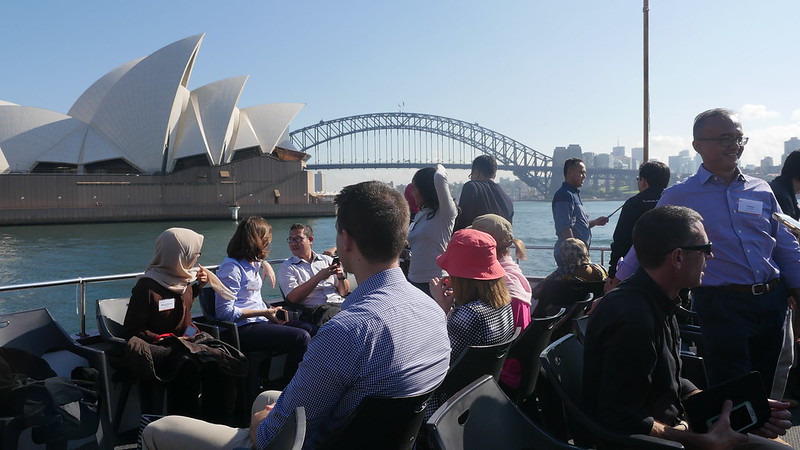 The fifth Australia-Indonesia Leaders Program: Future Cities begins with a cruise through the Indigenous history of Sydney Harbour.

The Australia-Indonesia Centre introduce the fifth Australia-Indonesia Leaders Program, which focuses on the theme of future cities. Hosted by the Tribal Warrior Aboriginal cruise group, 30 delegates from Australia and Indonesia first learned about the history of the nation’s largest city through the eyes of its first inhabitants.

The Tribal Warrior hosts taught delegates about the original names and stories surrounding the city’s most iconic landmarks – the Sydney Opera House, the Sydney Harbour Bridge, Barangaroo and Mrs Macquarie’s Chair – during a three hour tour of the harbour.

Stopping off at Clark Island, delegates learnt about Indigenous food gathering techniques and cultural heritage, the connection between the early peoples of both Indonesia and Australia, the wartime history of the island, and were treated to lessons and demonstrations of traditional Aboriginal dance.

Moving from the most ancient continuous peoples on earth to the development challenges of the future, the group attended the exhibition launch of ‘The Form of the Informal’, a collaboration between The University of Sydney and Bandung Institute of Technology.

The two universities continue a long-term collaboration across their urban design and planning schools, to help discover solutions to the issues of encroaching informal settlements in Indonesian cities. The ‘Form of the Informal’ centres around a site visit to Lebak Siliwangi in Bandung in February 2017, where students collaborated to analyse how urbanism evolves in informal settlements.

Following this, the delegation was welcomed to Sydney by His Excellency Yayan Ganda Hayat Mulyana, Consul General of the Republic of Indonesia to New South Wales, Queensland and South Australia, and his wife Ibu Irene, at a reception at his private residence.

To learn more about the program, delegates, speakers and more, visit the Australia-Indonesia Leaders Program: May 2017 – Future Cities web portal.

“Cities should be safe, connected, caring and fun”: The City of Melbourne hosts the Australia-Indonesia Leaders Program

Back to the future: First Australians welcome the Australia-Indonesia Leaders Program