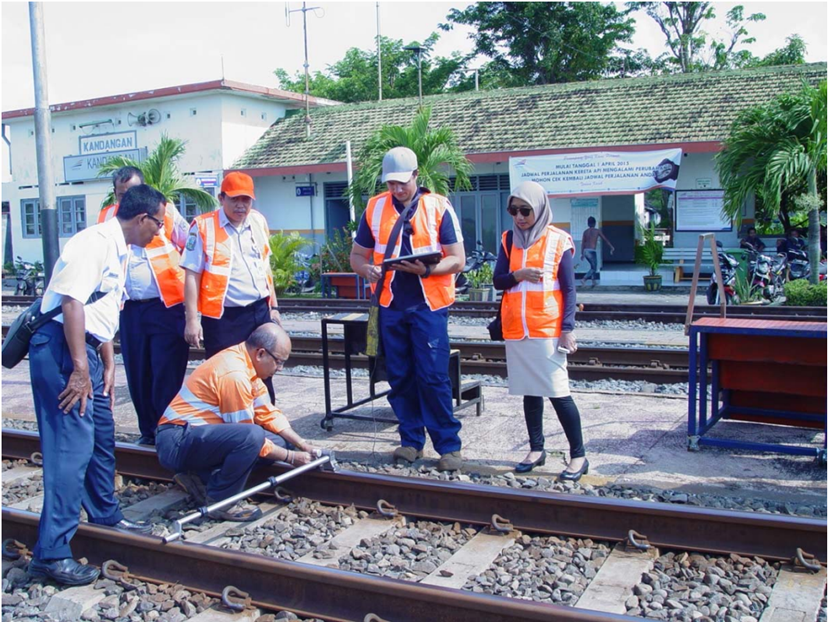 From 2016 a specially-equipped standard railcar will be rocking and rolling along the tracks of East Java. It will have carefully positioned sensors to detect its movement during normal operation, including its displacement and vibration.

The railcar instrumentation has been designed by Monash University’s Institute of Rail Technology (IRT) to provide data on the condition of the track and the response of the rolling stock. This will allow engineers to accurately estimate safe loads and running speeds. It’s part of a project financed by the Australia Indonesia Centre to facilitate safe and efficient movement of freight across the rail network, and particularly to improve the movement of goods into the new container port terminal at Teluk Lamong (Lamong Bay), Surabaya.

“There are many trucks and buses jamming up roads at the moment,” says project co-leader Dr Hera Widyastuti, of the Sepuluh Nopember Institute of Technology.

“If we don’t start getting this under control then it will bring about many issues. Improving the railway systems would reduce congestion and have economic impacts way into the future – we could transport goods much more smoothly, and reduce pollution and accidents.”

“As far as ports in Indonesia are concerned,” Chiu says. “The use of rail transport as a more efficient way of moving goods from one point to another should be explored. How to use the current railway network safely and efficiently, and the potential of re-activating other existing rail assets are important questions.”

“The Institute of Railway Technology (IRT) has an excellent record in delivering tangible benefits from rail -related projects in Australia and overseas,” says Chiu.

“They developed the instrumented railcars currently operating in various parts of Australia and in Brazil, and were recently awarded the national Business-Higher Education Round Table 2015 Award for Best Research and Development Collaboration.”

Rather than instrumenting the track at several locations to monitor its status, the instrumented railcar monitors and provides condition reports along the whole length of track. The data can be used to determine safe maximum running speeds along each segment of track for a particular load.

The researchers would also like to determine where lines need to be upgraded, and how much work it would take to bring decommissioned or unused lines back into service.

“Our research aims to examine inactive railways to see whether it is still possible to reactive them and determine what repairs are needed,” Hera says.